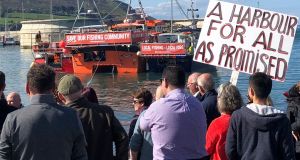 A protest at Greystones harbour over the prevention of commercial fishermen landing catches since a €300 million redevelopment.

Fishermen in Greystones, Co Wicklow, claim they are unable to land catches following a €300 million redevelopment of the local harbour for housing and a marine leisure quarter.

While some concerns had been raised about the smell of commercial fishing activity in the harbour, the fishermen and locals believe these could have been overcome.

New three-story €1 million terraced homes in the €300 million redeveloped harbour district are now on sale beside a marina with berths for 250 leisure craft, rowing and angling club, a new town square, a public park and a beach.

However, the redeveloped harbour has no facilities for commercial fishermen, generations of whom have worked out of the Co Wicklow town since Victorian times.

Ten fishermen, who had access to sheds in the old harbour, lost harbour mooring they had enjoyed when the redevelopment went ahead, despite 9,000 objections to Wicklow County Council.

The fishermen were promised new arrangements, and the ones who had used sheds in the harbour were compensated when construction works began. One who had used a former ladies’ lavatory on the pier as a shed was paid €40,000.

Fishermen Ivan Toole, Tim Storey, Peter Ryan and others insist they will land their catches on the beach at Greystones Harbour, in protest at the restriction on commercial fishing.

Saying fishermen feel badly treated, Mr Toole told The Irish Times they had agreed with the developers – Wicklow County Council and the Sispar Consortium – that space would be provided for them.

However, this space was subsequently used for a boat hoist and a commercial boat yard on the south pier. After the harbour was opened, they were offered “swing” moorings on chains connected to the sea bed within the harbour.

These were not considered safe by them.

An alternative solution involving berths inside the north pier alongside the marina was considered but as fishermen awaited keys to the marina the cleats to secure their boats were removed and they were told the arrangement was cancelled, Mr O’Toole said.

Mr Storey said he paid for a berth in the marina for a year, but was told not to load or unload his catch and not to store bait. Most of the commercial fishing boats have now moved to Dun Laoghaire or Wicklow town’s harbour.

Independent councillor Tom Fortune supports the fishermen. “Anyone that knows any history of Greystones knows that Greystones was always a fishing port, so it beggars belief that you would redevelop the harbour and exclude any facilities to facilitate the fishing tradition of the town”.

“When An Bord Pleanála refused the first design the redesign eliminated that space but nobody noticed, even among the 3,000 people who made submissions,” he said.

Mr Mitchell said the chain moorings had been laid out at a cost of €36,000, including one suitable for up to 20 tonnes . But he said a dispute arose over insurance and maintenance and the moorings were taken away again.

Saying some compromise should be made, Mr Mitchell added: “Ivan Toole had a boat and had to leave when work started on the harbour, as he was using the harbour at that time. If facilities cannot be provided he should be compensated”.

He acknowledged concerns had been voiced about the smell surrounding fish landing, but thought these could have been overcome.

“Boat parks, clubhouses and good public launching facilities have been provided to the anglers, rowers, divers, sailors and sea scouts. Many hundreds, who did not use it before, are now using the harbour and sea,” he said.

Wicklow County Council’s project manager Sean Quirke said the last discussions with the fishermen’s representative were in 2017. He said the town clerk subsequently issued correspondence to the fishermen in 2018 but received only one response advising of legal proceedings against the council.