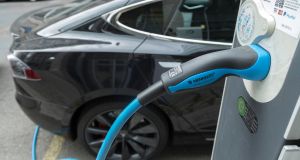 The impact on cities, the biggest source of emissions on a per capita basis, will be dramatic, given what is envisaged in the electrification of transport and the built environment. File photograph: Alexander Becher/EPA

The draft Government plan on responding to a warming world that potentially poses an existential threat to humanity sets out its ambition succinctly: “to make Ireland a leader in responding to climate disruption”.

Looking at cold data confirming Ireland’s deplorable climate record up to now may justify a cynical reaction – it indicates rising carbon emissions, failure to embrace renewable energy to the extent needed (and committed to) and the spectre of fines based on business-as-usual activity that would amount to billions of euro.

As the public became increasingly disturbed at the prospect of climate catastrophe this century, politicians agreed to incremental actions combined with a tangible lack of urgency, amid evidence that vested interests rather than concerned citizens mattered most. Fossil fuels would be at the heart of the economy in spite of their toll on the planet.

What is envisaged in this plan marks a sea-change in approach. It will require transformation by every government department; State agency, industrial operation and business; across all sectors from construction to waste processing. It will impact on every community – urban and rural.

It sets out unprecedented changes in land use; an overhaul of food production and rehabilitation of vital eco-systems to trap carbon, such as globally-important boglands.

The impact on cities, the biggest source of emissions on a per capita basis, will be no less dramatic, given what is envisaged in the electrification of transport and the built environment – especially in the way heat is generated and deployed.

It commits to allowing citizens play a direct role in an imminent energy revolution, notably through micro-generation. In many ways, success will hinge on how people embrace new technology in their lifestyles, such as the adoption of smart metering.

The draft document spells out hundreds of climate actions backed by “implementation maps”, timelines and identification of responsible organisations. It includes a major reform of governance on climate mitigation and adaptation measures including the adoption of five-yearly carbon budgets that will limit overall emissions.

This amounts to “a clear step-change in our emissions performance”, it concludes, that will ensure we meet demanding 2030 targets agreed at EU level. Tellingly, it concludes this is not only technically feasible but it is “also economically viable”. It is an also attempt to get Ireland in line with the ambitions of the Paris Agreement.

On urgency, it warns “the sooner the shift is initiated the less dramatic and costly it will be for Ireland”, while industry that fails to decarbonise will quickly become uncompetitive.

The Government, notably Minister for Climate Action Richard Bruton who has led the process of completing the whole of Government report, has built it on the imprimatur of the radical recommendations of the Citizens’ Assembly and all-party consensus achieved through the recent landmark report from the Oireachtas Committee on Climate Action.

On the potentially contentious issue of carbon tax increases, the draft report endorses a move to increase the levy on fossil fuel consumption to €80 per ton of CO2 by 2030.

The full costings for the plan were not evident in the document seen by The Irish Times but they will amount to a great many times more that the National Broadband Plan and national children’s hospital combined.