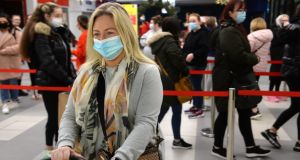 Catherine Brady, the first person to enter Penneys in Blanchardstown, as it opened its doors on Tuesday after a six-week lockdown. Photograph: Dara Mac Dónaill / The Irish Times

By 6.30am on a dark and cold Tuesday morning a not entirely socially distanced queue of around 150 people had formed outside Penneys in the Blanchardstown Centre as the shop readied itself to be amongst the first non-essential retailers to reopen after six weeks of lockdown.

While it was questionable if many of the people in line were observing the two metre rule as they waited, compliance with the face mask regulations was universal and, despite the ridiculously early hour, spirits were high.

As Ilze Kripititie raced up an escalator in the almost entirely empty west Dublin shopping centre to join the queue in the distance she gestured to her friend Grabija Smite. “She wanted to come. I’m not sure why I am here really.”

Her friend smiled and nodded.

“She doesn’t speak any English and has only been here a couple of months but she knows all about Penneys,” said Kripititie who is from Latvia but living in Dublin. “She is going home soon and wanted to buy gifts before she goes. “This is a great place to buy presents I think,” she said before taking her place at the end of the line.

At the very top of the queue stood Catherine Brady from Dublin 15. “I got here at quarter to six,” she said. “I have to be in work at eight so I will be in and out. I’m just looking for pyjamas. It’s not that early really, is it? I’ve been awake since four. My three-year-old had me up.”

The person who was second in the queue was actually the first to arrive at the centre. “I am here for the pyjamas, the Christmas duvets, but mainly the socks. I hope it is worth it, I have been here since 4am,” Sandra Hutchinson said.

And why was she not the first in the queue if she had been here so early?

“Well, we were out in the car park and we were waiting for someone else to arrive and to make a move. I thought the queue would be much bigger. I didn’t want to be the first in.”

She had travelled up in the dead of night from Athy, Co Kildare. When it was pointed out that she had crossed county boundaries in possible breach of Level 3 restrictions she said. “Ah no, I have an appointment in Dublin at midday and sure isn’t Penneys an essential journey? We all need socks, don’t we?”

When asked if she’d be in and out she shook her head vigorously. “It’ll be a while before I get through all the floors.”

Louise Murphy arrived at 5.45am and was standing right behind Hutchison. “I tried two or three doors before I could find one that would open,” she said. “I need to get underwear, a coat, socks, definitely socks, we all need the socks. I am all set for the PJs though. My friend lives in Newry and Penneys was open there so she posted them down to me.”

The woman standing right behind her was not “all set” for the PJs, not by a long shot. Her name was Aoife McGuire and she was in the shopping centre in search of 12 pairs, one for each member of her family.

“I’ll be in and out as I have to get the kids to school,” she said. “I have to buy the pyjamas for everyone because none of the rest of them would get out of bed. It’s very stressful to be honest.”

Well, one of family did come with her.

Her 16-year-old brother Jamie stood somewhat sullenly by her side.

“He’s the muscle,” she said. “He’s going to carry everything for me.”

And how did he feel about that?

“I just came up for something to do,” he said.

Something to do? It was not yet daytime would he not have been better off in bed?

Then he looked up at the top of the queue where there was something of a kerfuffle. At exactly 6.47am, some 13 minutes before the appointed hour, the security guard made a signal and started admitting people in groups of 10. Within five minutes the queue had completely disappeared.

An older man stood waiting patiently as people filed past him into the shop. Was he not going in?

“No, no,” Gerry Robinson from Corduff said. “I am just waiting for my wife, she’s inside already.”

Did he mind being here so early?

“Not at all. I think it is an ideal time for people like us. We wouldn’t be doing anything else anyway as we are retired. So we will come in early, go into Dunnes when it opens at 8am and then we will be home for a bit of breakfast, a cup of tea and some telly by 10. This means we get to avoid all the crowds.”

Back inside, staff were waiting at the tills for the steady stream of shoppers, many of whom had congregated around the festive pyjamas, socks and face masks, to come their way.

“We’d normally be in at six anyways,” one said. “I don’t mind the early starts at all. It’s great to see people out shopping again. It’s great to get a bit of normality back, isn’t it?”