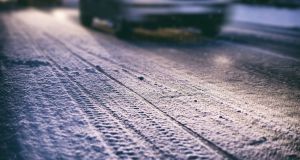 A chance of snow on high ground as temperatures drop below freezing overnight, according to the Met Éireann forecast. Photograph: iStock

Temperatures are set to drop over the coming days with hail, sleet and snow on high ground forecast as the State emerges from Level 5 restrictions and the December countdown to Christmas begins.

Conditions will become cold and wet later this week with hail and thunder expected on Thursday and a chance of snow on high ground as temperatures drop below freezing overnight, according to the Met Éireann forecast.

Wednesday will be cold and breezy with afternoon temperatures ranging between 5 and 8 degrees and heavy showers, particularly in the northwest where there will be a risk of hail.

These showers will continue overnight on Wednesday with hail and thunder in some places and a chance of snow on high ground in the northwest. It will be a cold night with temperatures dropping to -1 degrees.

Thursday will be the coldest day of the week with maximum temperatures only reaching 5 degrees. The rain will continue with a hail and thunder in some places. Conditions should clear in the afternoon with rain continuing in the west of the country. Temperatures are set to drop as low as -3 degrees on Thursday night, with the coldest weather in Ulster and Leinster.

Friday will also be cold but dry and sunny in many areas during the morning, according to the forecaster. Showers in the west of the country will be heavy with a risk of snow in places, while longer spells of rain in Ulster and Leinster will fall as sleet on high grounds. Temperatures on Friday will only reach between 3 and 6 degrees with an added wind chill making it feel particularly cold, Met Éireann has said.

Rain and sleet will continue in Ulster and Leinster overnight on Friday with further showers in the west and north of the country on Saturday. However, the rest of the island will be largely dry and sunny with temperatures rising slightly to a maximum of 8 degrees.

Temperatures will drop again on Sunday and the outlook for next week is for more cool and generally unsettled weather, says the forecasters.