Directly elected official would take on responsibility for housing and transport 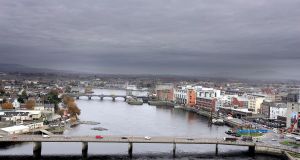 The Government aims to have the first election for mayor of Limerick by the end of the year. File photograph: Brenda Fitzsimons

The future directly elected mayor of Limerick will be in line for annual pay of almost €135,000 under Government plans for the office.

An election for the new role is to be held later this year after the Cabinet signed off on the drafting of legislation to allow it to happen.

The intention is for the mayor’s salary to be equivalent to that of a Minister of State which stands at €134,976. Ministers are currently waiving 10 per cent of this.

The future director general of Limerick City and County Council is to be paid around €171,000, up from the €162,000 salary for the current job of chief executive which is being replaced. The Department of Public Expenditure will have the final say on salary levels for both jobs.

The Government aims to have the first election for mayor of Limerick by the end of the year. Mr Burke said the holding of the election will be “contingent on the prevailing health advice at that particular time”.

The separate Electoral Reform Bill which is still being finalised provides for the holding of elections during the Covid-19 pandemic including the possibility that votes would take place over a number of days to help with social distancing. The proposed legislation for a directly elected mayor will be based on recommendations by an implementation advisory group set up after the successful 2019 plebiscite which saw the people of Limerick vote in favour of creating the office.

Proposals for directly elected mayors in Cork and Waterford were defeated.

Under the advisory group’s recommendations the mayor in Limerick is to have many of the executive functions currently held by the local authority’s chief executive including in the areas of housing and building; road transport and safety; strategic development and environmental services.

The mayor would also have responsibility for drafting the local authority’s annual budget, for approval by the elected council.

The new director general would retain responsibility for functions such as managing and accounting for the council’s finances as well as HR and local authority staffing matters.

Government departments are being consulted on the proposals for increased autonomy for the new directly elected mayor. There is also to be a mechanism for the removal of the mayor from office if there is a loss of confidence, a failure to perform their duties, or stated misbehaviour. Mr Burke said the Attorney General wants additional work done on the terms of how a mayor could be recalled before it is included in the legislation.

He said the mayor would have “significant powers” and given that they will be directly elected it would “enable the people of Limerick to have a greater say over how services and infrastructure are delivered and how Limerick develops”.

The planned legislation will also allow local authorities elsewhere to hold public plebiscites in 2024 on whether they should have a directly elected mayor.

Mr Burke said plans for a possible directly elected mayor in Dublin – which could encompass all four local authorities – are to be considered by the Citizens’ Assembly.