Adjustments to March plans may be needed following delays with AstraZeneca, says Minister 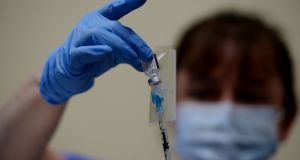 Minister of State Anne Rabbitte said the vaccine supply chain situation was ‘dynamic’ and an ‘agile plan’ would have to be employed to react to changes. File photograph: Alan Betson

The target to have every adult resident in the State inoculated against Covid-19 by September is contingent on existing commitments for the delivery of vaccines being met, a Government Minister has warned.

Expressing doubt about the target being reached in Minister of State at the Department of Health Anne Rabbitte also said the vaccine supply chain situation was “dynamic” and an “agile plan” would have to be employed to react to such changes.

The Fianna Fáil TD was speaking as she opened a Seanad debate on the vaccination programme.

She also warned the Green Party, Fianna Fáil’s partners in government, of the need for the need to avoid “mixed messaging” on Covid-19.

Green Party Senator Vincent P Martin said the current strategy to combat the virus was not working but the Government would not give “proper and due consideration” to a realistic proposal by the Independent Scientific Advisory Group of academics and experts calling for a zero-Covid strategy. The group he said described the strategy as “simply doing what is possible to suppress this virus towards elimination”.

But Ms Rabbitte told him that “all of us in the Government, of which his party is a member, like to stay on the one ship so that mixed messages do not go out to the general public. All of our colleagues in government are together on this point.”

Earlier, Ms Rabbitte pointed to remarks by Minister for Health Stephen Donnelly that he expected all adult residents to be vaccinated by September. “That remains our target,” she said but “it is contingent on existing commitments on the approval, supply and delivery of vaccines being met”.

She said that “adjustments may be necessary to the original target doses being administered by March” to take into account the news that AstraZeneca will not be able to meet its initial vaccine delivery commitments, after approval in the EU.

This was a more “significant concern” following the one-week drop in supply of the Pfizer/BioNTech vaccine while adjustments are being made in manufacturing processes.

She said deliveries of the vaccine in February are expected to be “at the lower end of what we anticipated, and there will be a further significant impact in March”.

She said this would be administered by GPs in their surgeries. She said the HSE “is preparing a public information campaign and will ensure everyone knows in advance when, where and how to access their vaccine”.

Independent Senator Rónán Mullen expressed concern that elderly members of religious orders living in congregated settings that were not regulated by Hiqa, would “fall between the cracks” and fall down the priority list for vaccination.

“They do not want to jump the queue” but wanted to be in line with others in their category.

He said he was aware of one group of at least 24 elderly religious in a congregated setting not regulated by Hiqa and there was a concern that they would “fall through the cracks”.

Independent Senator Eileen Flynn said a young Traveller told her he believed that members of the Traveller community would be used as guinea pigs for the vaccination process and that was because of misleading information circulating online.

Fine Gael Senator John McGahon said social media companies had to be held to account. An online query about vaccine scepticism will throw up Facebook groups with perhaps 1,000 people “talking about the dangers of vaccines. It is all hogwash”.

He added that no matter how much the social media firms “say they are acting, using their services responsibility or trying to delete material and tackle misinformation, it is not enough because misinformation is being allowed to spread like wildfire”.

Meanwhile, trade union Siptu said confidence in the rollout of the Covid-19 vaccine had “taken a real battering”.

It demanded that Mr Donnelly agree to publish regular reports on the sequencing of the administration of vaccines across the health service. It said this should include a full breakdown of all the various categories of workers who have received the vaccine.

Siptu health division organiser Kevin Figgis, said the fears and anxiety of tens of thousands of frontline staff working through this pandemic had been heightened by reports of gaps and pauses in the time schedules for vaccinations.

“To rebuild confidence in the fair and transparent implementation of the Covid-19 vaccine sequencing programme we are calling on the Minister to publish regular progress reports of its implementation.

“If there is any further deviation from the sequencing programme, or if there is more evidence of people skipping the queue, then full clinical advice from Nphet must also be published in full. This is the only way to ensure that the process is transparent and that the Minister can be held to account for its full implementation.”