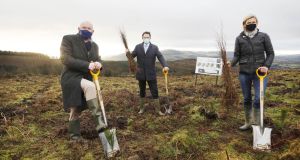 The supermarket group Aldi has committed to planting 1 million native Irish woodland trees around Ireland over the next four years under commitments towards the environment and sustainability.

The initiative is to be carried out in partnership with the Department of Agriculture’s Woodland Environment Fund (WEF) under which Irish businesses can partner with landowners and the department to establish new native woodlands – as opposed to non-native species such as sitka spruce. The Government’s target is to plant 22 million trees a year until 2040.

Aldi Group managing director Niall O’Connor, Minister for Agriculture Charlie McConalogue and Minister of State Pippa Hackett have planted the first of 30,000 oak, birch and ash trees to be grown in Aughrim, Co Wicklow. The trees will create a wildlife corridor for native species and enable grassland to revert to more natural vegetation and enhance biodiversity.

Working in conjunction with Green Belt forestry consultancy, the scheme will remove more than 160,000 tonnes of carbon emissions over a 100-year period, equivalent to emissions from about 400 cars each year.

Mr McConalogue said: “It is important that companies and individuals play their part in reducing the amount of carbon we emit, and I commend Aldi and the team for all their hard work.”

“We are targeting to plant 225,000 trees a year for the next four years which forms part of our wider sustainability strategy,” Mr O’Connor confirmed.

Ms Hackett added: “As Minister responsible for forestry, I am delighted to see Aldi interact with our WEF. It’s one which demonstrates the best of public private partnership, as it offers firms the opportunity to top up payments to farmers and landowners who commit to department-funded forestry.”

Aldi Ireland have been carbon neutral since early 2019. Over the past year, it has successfully introduced traceability technology to increase sustainability credentials across wild-caught fresh fish.

To date, it has removed more than 616 tonnes of plastic from its 145 Irish stores, replaced more than 870 tonnes of unrecyclable material with recyclable alternatives and removed 500 tonnes of packaging from its core ranges. Under a €60 million investment programme, stores will be powered by 100 per cent green electricity. Aldi has invested in improving its energy management systems and its entire network is now powered by 100 per cent wind generated energy.