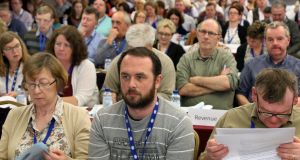 There will be no concessions by trade unions in the forthcoming talks with the Government that would lead to disimprovements in pension entitlements, mid-ranking civil servants have been told.

The general secretary of the Public Service Executive Union (PSEU), Tom Geraghty, said on Thursday the issue of public-service pensions would arise in the new talks to take place next month, but that the position of the trade-union movement was very clear on the issue.

He told delegates at the PSEU conference in Galway that unions would have to try to build in protections for members’ pensions for the future.

The conference backed calls for a time frame to be put in place for the full restoration of pay cuts imposed during the years of austerity and for increases of about 10 per cent – which were contained in a social partnership agreement several years ago but never paid – to be implemented as part of negotiations to take place this year.

Delegates also demanded an end to the requirement for civil servants to work an additional 30 minutes each day without payment and for the re-introduction of a working day of six hours and 57 minutes.

Delegate PJ McAteer of the union’s Revenue branch said gardaí had received increases of about €4,000 each on foot of their threatened strike last year.

“Fair play to them. They used their power to leverage more from the Government. Now what about fair play for us. We were told that the Lansdowne Road agreement was the only game in town. That was not the case.”

Michael Crowe of the PSEU’s executive committee said the additional-working-hours requirement was seen as a “kick in the teeth” by members.

“The monetary and production value of the additional time was practically invisible in most employments. What the employer gained from this in terms of minutes, they lost on the double in motivation and job satisfaction.”

Meanwhile, the president of the PSEU told the conference that the aim of public-service unions in the forthcoming talks with the Government was to secure the full restoration of pay cuts over the lifetime of a new agreement to succeed the Lansdowne Road accord.

Maria Ryan said all cuts made to income would not be restored in one go and any new public-service agreement may have to span a few years.

She said the agenda of public-service unions going into the new talks with the Government was to seek a deal that would “break the back” of cuts imposed over recent years under financial emergency legislation, known as Fempi, “so that by the end of any agreement negotiated, we will see full income restoration for all our members”.