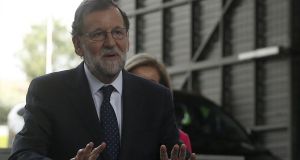 Spanish prime minister Mariano Rajoy: court appearance is not expected to probe any direct wrongdoing on his part, but instead possibly reveal evidence against other Popular Party members. Photograph: Javier Lizon/EPA

A wave of corruption cases affecting Spain’s governing party is dominating the political agenda just six months after the formation of a new administration and threatens to undermine the position of prime minister Mariano Rajoy.

On Tuesday, the high court announced it was citing Mr Rajoy to appear as a witness in an investigation into the illegal financing of his conservative Popular Party (PP), making him the first prime minister to do so.

Then on Wednesday, police arrested 12 people linked to the party, including the former regional premier of Madrid, Ignacio González, as part of an investigation into the alleged embezzlement of funds from a public water company.

“This news is yet another blow for the PP, which has been mired in a long list of corruption cases that are not helping its image at all,” noted La Vanguardia newspaper.

Mr Rajoy broke months of political stalemate by forming a new government last October after winning a June election. Although he lost the parliamentary majority his party had enjoyed since 2011, the Galician’s survival as prime minister amid a newly fractured political landscape was seen as a major victory. But having sought to focus on the economy’s strong performance and present himself as a safe pair of hands, his party’s corruption problems are hogging the headlines.

Although the PP has said it will co-operate with the high court, party spokesman Fernando Martínez-Maillo has insisted that Mr Rajoy “has nothing to hide and nothing to contribute” in the context of the investigation. He also cast doubt on the independence of the judiciary, suggesting that the opposition Socialist Party was behind the prime minister’s citation.

Mr Rajoy’s court appearance is not expected to probe any direct wrongdoing on his part, but instead possibly reveal evidence against other party members. However, the political repercussions could be substantial, given that the PP requires the support of other parties to govern.

Ciudadanos, the liberal party whose backing helped the PP to form a new government last year without entering a coalition, has repeatedly expressed concern at the scandals surrounding the governing party, leading to speculation that it could eventually support an opposition no-confidence vote.

On Wednesday, Ciudadanos leader Albert Rivera said that “the tip of the iceberg is appearing” regarding the PP’s involvement in corruption, but he fell short of withdrawing his support, underlining that the conservatives continued to win elections.

“Therefore, as long as they continue winning them, despite having rucksacks full of corruption, what we can do from the opposition is control them, create investigative commissions and demand changes,” Mr Rivera said.

Although the PP won last year’s election despite a rash of scandals related to its financial practices, the latest developments could discourage Mr Rajoy from calling early elections in the coming months, as some have been speculating, in order to strengthen his position.

Recent polls show corruption to be Spaniards’ second biggest concern after the economy.