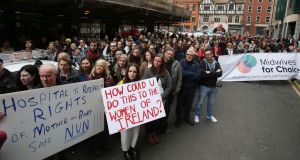 People protest outside the Department of Health in Dublin at plans to grant ownership of the new National Maternity Hospital to the Sisters of Charity religious order. Photograph: Niall Carson/PA Wire

Some 200 people protested at the Department of Health on Thursday afternoon against the Government’s plans to give the new National Maternity Hospital to the Sisters of Charity.

The group, which included representatives from Parents for Choice, Midwives for Choice and Atheist Ireland, chanted “Simon Harris we won’t wait, separate church and state” outside Hawkins House, on Poolbeg Street in Dublin.

The demonstration was organised following the department’s decision to give the order sole ownership of the €300 million hospital when it moves from Holles Street to the Elm Park campus, next to St Vincent’s University Hospital.

Councillor Éilis Ryan of the Workers’ Party, who organised the demonstration, criticised Minister for Health Simon Harris for tweeting about the new hospital earlier this week. “It’s grand to be telling us we’ve nothing to worry about on Twitter, but we would prefer if you actually got involved in the negotiations and didn’t leave it up to the doctors to have to come out and make public statements about what kind of healthcare we should be having in this country,” she said.

Louise O’Reilly, Sinn Féin’s health spokeswoman, described as nonsense Mr Harris’s comments about the Minister for Health retaining a golden share in the hospital. “I don’t think that’s good enough. I think the Minister needs to be very clear on this,” Ms O’Reilly said.

Robyn Myna, a protester from Athlone, said that the sisters “are same people that organised the Magdalene laundries in this country. I think it’s an absolute disgrace that we’re just handing something as precious as this to the people that did that to the women of Ireland. ”

An online petition set up by a UCD student, Denise Kiernan, against the move has been signed by more than 60,000 people.

Parents for Choice has also organised protests, for 3pm this Saturday, at St Vincent’s University Hospital and the National Maternity Hospital, in Dublin; at Our Lady of Lourdes Hospital in Drogheda; and in Limerick, Cork and Galway.