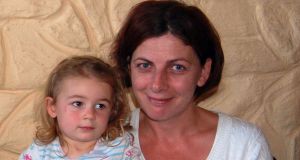 Una Butler with her daughter Ella.

A Cork woman, who lost her two daughters and husband in a murder-suicide, said on Thursday that people “have a right to know” how often these tragedies happen.

Una Butler’s husband, John Butler, who had been receiving treatment for depression, took his own life after he killed daughters Ella (2) and Zoe (6) in the family home, in Ballycotton, Co Cork, on November 16th, 2010.

Speaking at a symposium on media coverage of mental health stories – organised by the Journalism Department at the University of Limerick – Ms Butler called for accurate and sensitive reporting of murder-suicide cases.

“I can understand that people just cannot comprehend or don’t want to read about it and that is why it is so important that, when murder-suicide cases are being reported on, it should be reported accurately and in a sensitive manner – no sensationalising, no glamorising of the events,” Ms Butler explained.

“The media have and are in a powerful position on how they report anything in general, but in particular with murder-suicide accurate reporting is essential. People and society have a right to know how often these cases are happening.”

Ms Butler, who has advocated for reform of the Mental Health Act since the tragic deaths of her family, believes her children would “still be alive” had she been involved in her husband’s treatment.

She said she “turned to the media” in seeking a detailed investigation into her husband’s treatment. “I engaged with the media following the murder-suicide of my husband John and daughters Ella and Zoe in 2010. After their deaths I received a two-page report from the HSE which was inadequate and an insult.

“I called for a detailed investigation into his treatment from the HSE and also wanted the Mental Health Act 2001 to be amended to include spouses or partners in the treatment of the family member suffering with their mental health to help prevent further cases from happening and also especially for the welfare of children.”

Looking back on the horrific incident, she said: “I should have been involved. The medical professionals would have had greater insights into (John’s) behaviour. It’s a known fact actually that patients aren’t even asked if they want to involve a family member, because it’s not standard practice.

“I believe Zoe and Ella would be alive today. My husband (had) never hurt me; He was suffering with a psychiatric illness. I believe had I been involved in his treatment . . . he may have been treated differently. I should have been educated about his illness and known what to do; I hadn’t been told. I hadn’t been told (about) the effects of his medication or how he would react after that.

“Why is a person treated in isolation? They’re not living in isolation, and the family are there to support them. It’s an awful tragedy when a child dies through an illness, but when a child has been murdered by a parent it’s just unnatural.

“The bottom line is that which ever way you look at the previous cases of murder suicide in Ireland the past 20 years or so, the mental health of the perpetrator is a major factor. Going through the murder suicides that have happened in Ireland in the past 15/20 years, the statistics don’t lie; in over 60 per cent of the cases the perpetrator had a psychiatric illness.”

Ms Butler argued that while the media has an important role in reporting murder-suicides, she said she believes reporting on funerals was “sensationalising a tragedy and glamourising who was at the funeral”.

“That is my personal opinion; I don’t think (a funeral) is any place for the media to be.”

She added, if families ask for privacy, then “it should be respected”.

“At the time of my (children’s) funeral the media were asked to keep their distance, and in fairness to them they kept their distance, because we didn’t allow recording of the mass or anything like that, at the time,” she said.

Reiterating that the media has an important role to play, Ms Butler added: “I do think that because I spoke out in the media an investigation did happen. I also think that it raised awareness of how often murder-suicide is happening in Ireland.”

Ms Butler said 27 cases of murder-suicides had occurred in Ireland since 2000, which included the deaths of 32 children.

Also speaking at the symposium, the chairman of the Press Council Seán Donlon praised mainstream Irish media for its handling of sensitive news stories, including murder-suicide and funerals.

“My view, having spent a lot of time abroad and in Ireland, is that the Irish media behave very responsibly in sensitive situations, whether it’s (covering) funerals, suicides, family tragedies . . . I think it’s an example to the world, because they compare particularly to our neighbours in the UK,” said Mr Donlon.

“My experience, and the experience of my predecessors on the press council is that, by and large, the Irish media honour (reporting guidelines) responsibly. And I think we have a lot to be grateful for, in those terms.”

Mr Donlon expressed concern at the quality of news feeds on social media: “I’m much more concerned about the future, particularly with the so-called ‘new media’ that are now the main news providers. More than 50 per cent of people in Ireland take their news from things like Facebook, and they don’t have any code of practise, and the news (feed) is given to us by machines and not by people.”

“So, my hope for the future is that, the sort of conduct that we see with the press in Ireland, should be replicated internationally by these big giants, like Facebook and Google and so on. There should be human beings, not machines (generating news content); you can’t programme a machine to behave in a responsible way – you can programme it to behave in a predictable way which is what’s happening, but you can’t programme it for every eventuality.”