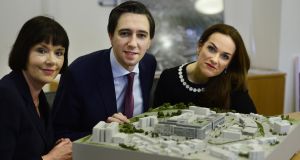 The Master of the National Maternity Hospital has said nuns will “not be running the hospital” when it moves to St Vincent’s Hospital campus and it will be “completely independent”.

Rhona Mahony maintains that the ownership of the new hospital is not her concern and that she is more concerned about delivering care.

There is a ‘triple lock’ in place which will guarantee the autonomy of the National Maternity Hospital, she told RTÉ’s Today with Sean O’Rourke show.

“Let me be very clear, the nuns will not be running this hospital, it will not be under Catholic ethos. It will be completely independent.

“The ethos will be excellence in clinical care, it will not be a Catholic ethos.”

The Department of Health’s decision to give the Sisters of Charity sole ownership of the new €300 million hospital when it is relocated from Holles Street to the Elm Park campus adjacent to St Vincent’s Hospital has provoked controversy.

On the same programme retired judge Nicholas Kearns, who is de facto chair of the board of governors of the National Maternity Hospital, said that he was surprised and disappointed by the intervention of former master of the hospital Peter Boylan.

On RTE’s Morning Ireland Mr Boylan said it was inappropriate for the Sisters of Charity to have influence on a maternity hospital. It was particularly inappropriate for a Catholic order given the “bad history”, he said.

When abortion is legalised in Ireland, are we to expect that a maternity hospital owned by a religious order will permit that procedure to be carried out in a hospital it owns?

Mr Kearns said it was difficult to understand Mr Boylan’s position since he is a serving member of the board of the National Maternity Hospital.

As a former lawyer, he said he was satisfied with the legal agreement which he regarded as ‘sound’ and would guarantee the hospital’s own ethos.

He added that it will be a new company, will provide a new range of services, and will operate without religious or ethnic distinction. Under the reserve powers it will be clinically and operationally independent.

Dr Mahony said that if the new hospital does not go ahead “we are going to be punishing women further.”

Women deserve a hospital that is purpose built, she added.

Dr Mahony said there would be complete medical independence for the National Maternity Hospital. “It’s time for everyone to work together to get this done.”

Earlier Dr Boylan asked why do the Sisters of Charity want to own a maternity hospital?

He pointed out that at present vasectomies and female sterilisation are not carried out in St Vincent’s Hospital which is run by the Sisters of Charity.

“What about IVF, abortion, gender realignment which will be contrary to the nuns’ beliefs?”

Mr Boylan was particularly concerned about comments made a member of the Sisters of Charity where she said could not make a judgment on concerns about the congregation’s ownership of the hospital influencing the medical care provided.

“It would be unique in the world if that happened.

“She had an opportunity to say they will not interfere in clinical decisions, but she didn’t.”

Mr Boylan said there was a “huge sense” of public outrage at the decision to hand over ownership of the new hospital to the Sisters of Charity.

Mr Boylan said he fully supported the current Master Rhona Mahony and recognised the need for a new hospital. He said she had been “backed into a corner” by the Minister for Health who appeared to be saying that it was either this option or “it won’t happen.”

“The Minister is the only person who can sort his out.

“He caused this. He was looking for an easy win, but he has scored an own goal.”

“It is completely unacceptable that €300 million of our money, State money is being given to the Sisters of Charity to build a hospital,” he said.

Sr Agnes Reynolds, a member of the St Vincent’s Healthcare Group board told The Irish Times that the new hospital on the St Vincent’s campus in Dublin will “always respect the rights of the mother and the baby”.

A member of the St Vincent’s Healthcare Group board, she said the new maternity hospital would “reach out to all creeds and backgrounds . . . and give a good service to people”.

The Sisters of Charity has failed to meet its financial commitment to a redress scheme for victims of institutional child abuse. It has paid €2 million of the €5 million it promised to contribute in 200

Mr Kearns said that the redress scheme was not considered during the negotiations between the National Maternity Hospital and St Vincent’s Hospital.

When asked if buying the site from the Sisters of Charity had ever been considered Mr Kearns said that ‘it was never on the table.’

Mr Harris has said the Sisters of Charity would not benefit financially from their ownership of the hospital.

Mr Harris said it was “not acceptable” that some orders had yet to pay all they owed to the redress scheme.

However, he said “it is wrong to conflate this extremely important redress issue” with the decision to build a “desperately” needed maternity hospital.

Labour leader Brendan Howlin said another maternity hospital can be advanced if the National Maternity Hospital move to St Vincent’s needs to be delayed.

“The bottom line is we can’t have a situation where the public doesn’t own a hospital that it paid for.”

He told RTE’s Today with Sean O’Rourke show that it would be better to have the new National Maternity Hospital completely in public ownership.

“It is an anachronism harking back to the past for a modern maternity hospital to be owned by a religious order.”

He asked: “why would we build a modern hospital that isn’t entirely public owned.”

He said he would have looked at the value of the land and at the government’s agreement with the religious order on divestment for a possible solution.

4 Portrait of 1916 nurse ‘airbrushed from history’ unveiled in Seanad