Public hospitals: Consultants to be offered €250,000 a year

Government to appoint 1,000 additional medical specialists over next 10 years 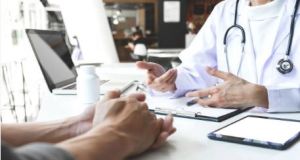 The Government said on Wednesday that from next summer all medical specialists will be appointed under a new Sláintecare consultant contract which will not allow private practice. File photograph: Getty

Hospital consultants who commit to working only in public hospitals will be offered a salary of up to €250,000.

The Government said on Wednesday that from next summer all medical specialists will be appointed under a new Sláintecare consultant contract which will not allow private practice.

Taoiseach Leo Varadkar also said the Government had agreed to appoint a net 1,000 additional hospital consultants over the next 10 years.

Mr Varadkar said doctors wanting to become consultants, or those medical specialists already in place, could opt for the new contractual arrangements.

The new salaries would apply to those consultants who gave a commitment to work in public hospitals only and “dedicated themselves to our public health services”. Mr Varadkar said the new initiative represented “a major change”.

“This is Sláintecare happening,” he said.

Minister for Health Simon Harris said the pay to be offered to consultants would be some of the highest in the OECD or the EU.

Minister for Public Expenditure Paschal Donohoe said while the Government would engage with medical representative organisations on how the new contract would work, the pay on offer had been “fixed” .

Mr Donohoe also signalled to other public service groups that the additional payments on offer to hospital consultants were only on foot of a new contract and in return “for the complete forfeiting of work in private healthcare”.

While the Government is offering the new contract with the salary of up to €250,000 from 2022 to all consultants currently in the public system, it is not proposing to buy out existing rights to treat fee-paying patients.

This means that if existing consultants with such rights do not all opt to move to the new system, some forms of private practice would remain in place in public hospitals for many years.

Mr Donohoe said the move to a public-only system would see State-owned hospitals lose out on a projected €16 million to €25 million in income from 2021 onwards which would have otherwise been generated from private patients.

He said future governments would have to deal with that matter as part of future health financial estimates processes.

However, Mr Donohoe said he was very clear this was a matter that was worth considering “for the very significant increase in capacity that the new contract would deliver”.

“If we are going to be providing 2,000 new hospital beds under Ireland 2040 and the HSE capital plan, we have to have the consultants available in our theatres and by the beds to ensure that this capital investment delivers for patients.”

He said the process would take time, but believed a critical mass of public-only consultants would be achieved within a reasonably short period.

The new Government initiative was announced as thousands of consultant and non-consultant doctors in public hospitals who are members of the Irish Medical Organisation (IMO) are planning to stage industrial action and potentially go on strike early in the new year over pay and recruitment issues.

The IMO said the Taoiseach had to understand a resolution of the pay issue for consultants would require negotiations “and not unilateral pronouncements in the Dáil”.

It said in the absence of such talks the planned industrial action by hospital doctors would go ahead.

The Irish Hospital Consultants Association welcomed “the formal recognition by Government of the consultant recruitment crisis and the need to restore parity”, but warned that the new proposals would “create an annual funding hole of €650 million in cash-starved public hospitals and wreak havoc on patients”.