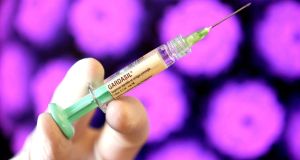 The HSE is expected to tell the Oireachtas health committee that it is still the plan to introduce HPV testing in the first quarter of next year. Photograph: Voisin/Phanie/Rex/Shutterstock

Independent reviewers into smear tests carried out by CervicalCheck have expressed concern that “unfounded criticism” of their work could result in “diminished coverage which could only place more lives at risk”.

A review by the UK-based Royal College of Obstetricians and Gynaecologists (RCOG) earlier this month found that an opportunity to identify 159 women’s cervical cancers was missed by CervicalCheck. In total, the review found a discordant result in a third of case they reviewed, 308 out of 1,034 women.

Two prominent campaigners, Lorraine Walsh and Vicky Phelan, said they did not have confidence in the report after they highlighted issued with the mislabelling of slides.

The lead assessor with the review, Prof Henry Kitchener, is due to appear before the Oireachtas Committee on Health on Wednesday morning and is expected to state that while there was “capacity for error”, the issues were “isolated”.

“In a complex study of this size involving more than 1,000 women and 20,000 individual data items, including 3,300 smear results, we acknowledge there is capacity for error,” his opening statement says.

“In a very small number of cases, fewer than five, it has been necessary to issue supplementary reports because new information came to light, and in two of these cases the conclusion was updated. While these isolated incidents are regrettable, they in no way impact the overall conclusions or recommendations laid out in our aggregate report.”

He is expected to say he “would be concerned if unfounded criticism of our evidence based report undermined trust in our findings and confidence in the CervicalCheck programme”.

“This could have the effect of diminishing coverage, which could only place more lives at risk. It is very important that the benefits of cervical screening in the existing programme are accurately portrayed in terms of public health.”

Meanwhile, the Health Service Executive is also due to appear before the committee on the issue.

According to an opening statement from Damien McCallion, interim national director of the national screening service, women are now waiting an average of six weeks to receive their smear test results.

“We hope to sustain the turnaround times at this level going forward. This will ensure that women and their GPs get their results in a reasonable time period.”

He is also expected to tell the committee that it is still the plan to introduce HPV testing in the first quarter of next year although the project is proving to be “complex”.

“The implementation project, however, remains complex, with a number of risks which we continue to actively manage including IT system changes, laboratory preparedness and to ensure sufficient availability of colposcopy services to address future demand from HPV primary screening on colposcopy services.”