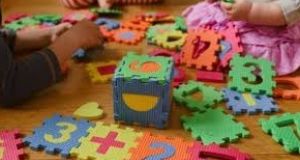 It would be “totally reckless” for the State to cover insurance costs for creches Taoiseach Leo Varadkar has told the Dáil as just one company is now offering to quote for the childcare sector. Photograph: iStock

It would be “totally reckless” for the State to cover insurance costs for creches Taoiseach Leo Varadkar has told the Dáil as just one company is now offering to quote for the childcare sector.

He insisted however that the vast majority of crèches would re-open after the Christmas break and would have insurance coverage.

Sinn Féin leader Mary Lou McDonald called for an emergency fund for creches because of concerns that a number could be forced to close if they could not get insurance.

She said childcare facilities faced “extortionate” increases in insurance costs and parents needed assurance that children would have a place in January and that workers would have employment.

The Dublin Central TD said the entire insurance sector “needs manners put on it” and an over reliance on private providers of childcare had resulted in the latest crisis.

Both Ms McDonald and Fianna Fáil leader Micheál Martin said careers in childcare were not properly supported, adding that pay was low, and most of the childcare workers were women.

Ms McDonald said the State should step in and provide emergency insurance.

The Fianna Fáil leader said the Government had been aware of insurance difficulties since April but Mr Varadkar was saying he had only become aware of it on December 6th.

“The Government response to date so far been very confusing, has been very slow off the mark and it is incredible the degree to which the Government has been caught by surprise.”

He added that the said the average family across the OECD spent 12.6per cent of income on childcare but it was 27.4 per cent in Ireland.

Some 1,300 crèches are scrambling to get insurance but the Taoiseach said that 869 of them have been given quotes and the remainder could be dealt with in a short time.

He said Allianz insurance had offered to provide cover at a cost of €60 but that there might be a “very small number of high risk facilities”, that would not get insurance.

The Taoiseach rejected Sinn Féin’s call for State insurance as “totally reckless” and claimed it was further evidence that the party could not be trusted with the public purse.

He was confident the situation was “under control” and would be resolved.

Mr acknowledged that families faced a big burden in childcare costs but he said the Government had done more than any other to provide childcare facilities and subsidies.