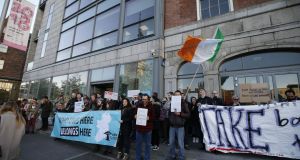 The operators of unregulated websites are earning thousands of euro by block booking appointments on the State’s online visa system.

Foreign nationals say making a visa renewal or registration appointment at the Burgh Quay immigration office in Dublin through the Irish Naturalisation and Immigration Service (INIS) website has become near impossible.

Many applicants are now choosing to hand over sensitive personal data to third parties in order to secure appointments.

One Dublin-based operator, who is originally from China, said he recently hired a number of friends to help him deal with the upsurge in demand for appointments while another is currently block-booking slots from his home in Nairobi, Kenya.

Indream Luo, who describes himself as the founder of the GNIBIRP appointment site, writes on his Linkedin page that he has “10k+ monthly users, 6k+ weekly users and 2k+ daily users”. His website charges €20 for a “regular appointment” and an extra €10 for appointments on specific dates.

The software engineer told the Irish Times he set up the site after he struggled to secure his own appointment early last year. He says he initially shared the booking algorithm online in return for donations but eventually began charging people. He said he tried running the site as a full-time job but struggled to live off the income so found work elsewhere. He said that since September he requests have risen substantially.

Mr Luo is just one of a growing group of unregulated operators using their technological expertise to take advantage of the Government’s visa appointment website and charge immigrants desperate to renew or register their visa.

A year has passed since the Department of Justice committed to opening a new immigration website but one has not yet been delivered.

A department said a software update in September of last year had stopped the block booking and was being regularly monitored. However, he acknowledged that unregulated operators had been able to secure “multiple appointments through the use of automatic software”.

The online visa system started in 2016 to ease the long overnight queues that were often seen outside the Dublin immigration and it should allow applicants to sign up, free of charge, up to 10 weeks in advance of their appointment. The system has become so clogged up, however, that users are increasingly opting to pay independent operators between €20-€40 to sort out the problem.

Renan Danton, the operator of gnibot.com, who is based in Kenya, said he was struggling to secure appointments for his clients due to the high demand. Appointments now “disappear in less than five seconds,” he said.

“In other words it is impossible for humans to book an appointment and this is happening for long to months now,” he said.

One of country’s main labs unable to process Covid-19 tests over weekend due to staff shortages 13:35
Westmeath nursing home says it is managing Covid-19 outbreak 13:29
Father unaware partner and baby dead until gardaí called to raise alarm 13:21
Science Week 2020 to stage hundreds of virtual events all over Ireland during November 13:10
Golf and tennis clubs closed under Level 5 as deemed ‘non-essential’ services 12:23