President: Debate on EU’s future should move from backrooms to street 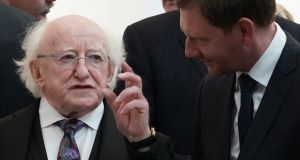 Growing economic, political and climate challenges have brought Europe to a new brink, similar in scale to the epochal changes that ended the Cold War 30 years ago, President Michael D Higgins has warned.

In a keynote address in Leipzig, on the second day of his state visit to Germany, the President said growing pressures required a serious debate over Europe’s future to be dragged from EU backrooms, and wrestled back on to the “European street”.

“How often ... are we speaking of a social Europe? What set of shared values and ethics do we as Europeans aspire to uphold, defend, build upon and promote?” he asked in the University of Leipzig’s Paulinum hall, built on the foundations of the university church destroyed by East German authorities in 1968.

Recalling his happy years as an academic, and two previous visits to Leipzig, Mr Higgins said neglecting the diversity of Europe’s intellectual, political and economic traditions was aggravating public disillusionment with social elites.

Narrow debate and fixed doctrines, he said, were holding back the continent’s next transition beyond coal and steel to a “green Europe” that “continues to provide for its peoples without damaging irrevocably the fine ecological balance of the planet”.

Europe’s future is far from certain, he said, if it ignores the losers of globalisation and clings to a technocratic, austerity-centric approach to society that permits “speculative flows of insatiable capital”.

He praised German philsopher Jürgen Habermas, who recently celebrated his 90th birthday, for urging that Europe be taken out of the hands of a “neoliberal orthodoxy” and returned to the people in democratic, reformed EU institutions.

His speech was greeted with sustained, minute-long applause by the audience in Saxony, where the anti-migration, euroskeptic and far-right Alternative für Deutschland (AfD) has surged ahead in polls ahead of an autumn state election.

University of Leipzig rector Beate Schücking thanked the president for an “inspiring lecture” and for the Government’s funding of Irish language teaching at the university.

Listening in were dozens of language students who learn Irish in Leizpig. “Most of us took it on for fun but now we all see the importance of supporting minority languages,” said Sophia Wilms (22). “We would love more contact and exchange with people in Ireland who speak the language.”

A century ago Leipzig was a spiritual home of Irish and Celtic studies in continental Europe thanks to local academics like Ernst Windisch.

Mr Higgins inspected manuscripts of Windisch’s Irish grammar, and his translation of Táin Bó Cúailnge. This year marks the centenary of the death of influential German celtologist Kuno Meyer in Leipzig.

But Celtic studies and Irish language teaching are on the retreat across Germany, with the last professorial chair given up in Berlin 20 years ago.

Other minority languages fare better in Leipzig, say local academics, with Catalonia funding a chair here while Galician and Basque regions also finance studies of their languages and culture.

Leipzig lecturers said they would welcome greater funding – even a professorial chair of Irish – to complement Ireland’s new push for a wider and deeper exchange and understanding with Germany.

In 1989, Leipzig was the starting point of Germany’s peaceful revolution and this church its focus.

As the Irish visitors listened in the pews, one eye witness from 1989 recalled how social and climate concerns were just as important as politics in forcing the slow – then fast – collapse of East Germany 30 years ago.

“We brought traffic to a standstill,” said Mr Frank Pörner, a 1989 dissident, “25,000 people came voluntarily, without any organised invitation and today I cannot imagine that a demonstration of this size remained non-violent.”

“We in Saxony are concerned about what is happening in Anglo-Saxony,” said Mr Kretschmer, a leading figure in Chancellor Angela Merkel’s Christian Democratic Union (CDU).

“We have understood very well what bothers the Irish and we all have a great interest that the European Commission gets to work soon so that the great challenges before us can be solved.”