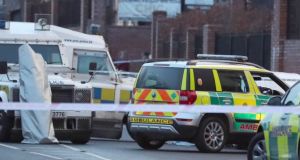 A senior police officer has blamed the Irish National Liberation Army (INLA) for the murder of Jim Donegan who was shot dead outside a school in west Belfast in December while about to collect his teenage son.

PSNI Detective Chief Inspector Pete Montgomery, who went on BBC’s Crimewatch programme in Thursday to make another appeal in tracing his killer, also disclosed that the gunman made a previous attempt at the school to murder Mr Donegan.

The officer showed new CCTV footage from November 29th, just days before 43-year-old Mr Donegan’s murder on December 4th, showing a person who he believed to be the killer standing among schoolchildren

“This is CCTV footage from 29th November and I believe this is the same person who murdered Jim,” said Detective Chief Inspector Montgomery.

Later at a press facility in Belfast Detective Chief Inspector Montgomery elaborated: “Today I am releasing new CCTV footage which I believe shows the gunman, five days before Jim’s death, waiting for him to arrive to collect his 13-year-old son with hundreds of innocent children nearby.”

“Jim was not collecting his son that day but I believe that, if he had appeared, he would have been murdered at this point,” he added.

This is the latest footage that police have released about the murder of Mr Donegan who was shot dead by a hooded man wearing a high-visibility yellow jacket outside St Mary’s Grammar school on the Glen Road.

Detective Chief Inspector Montgomery said the killer may be in his late 30s to early 40s, approximately 1.7m (5 ft 8 in) in height, and that he may walk with a limp or have an existing medical condition which affects his gait.

Appealing for public assistance in finding the killer he added, “This is someone who thought it was acceptable to put the lives of countless children at risk and murder Jim. Please help me put him before the courts.”

In the footage released in December the killer is seen emerging from a lane in Clonelly Avenue onto the Glen Road around 3.10 pm. He walked past several parents and children before firing eight shots at Mr Donegan while he sat outside the school in his red Porsche Panamera. Mr Donegan was waiting to collect his young teenage son.

About two minutes later, after the murder, the gunman is pictured running back up Glen Road and back along the lane into Clonelly Avenue.

On Thursday Detective Chief Inspector Montgomery disclosed that he believed that paramilitaries, specifically the INLA, were involved in the murder.

The INLA was formed in December 1974 and declared a ceasefire in 1998. It remained active however and formally declared an end to its campaign in 2009.

Security figures however have insisted that the INLA continues to be active and that some of its members have been involved in criminality including murder and drugs-dealing.

It is estimated that the INLA carried out more than 130 killings since it was established, about 120 of them carried out during the period up to 1998.