Brexit: May tells Varadkar she believes Commons will support deal 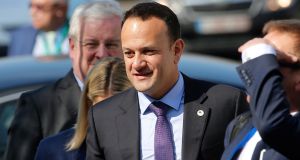 Taoiseach Leo Varadkar arrives for a meeting ahead of the European Council summit in Brussels, Belgium. Photograph: Julien Warnand/EPA

British prime minister Theresa May repeatedly assured Taoiseach Leo Varadkar that she did not intend to crash out of the EU without a deal when the two leaders met on the fringes of the European summit in Brussels on Thursday.

Sources with knowledge of the brief bilateral meeting said that Mrs May was insistent that she was working to avoid a no-deal scenario but did not make any requests of the Taoiseach to assist her. Nor did she offer a new route to securing a House of Commons majority for her deal, but rather said she was confident that she could obtain the necessary votes.

Mrs May has twice, by large majorities, seen the withdrawal agreement she negotiated with the EU rejected by MPs, but is committed to bringing the measure back to the Commons for a vote. She indicated that she may do this next week, but did not give a firm commitment. She also told EU leaders that she believed she would have secured parliamentary assent for the Bill this week had she been allowed by the Speaker of the House of Commons John Bercow to run the vote again. He blocked such a move on Monday.

Senior Irish sources agreed that the extension being discussed by EU leaders on Thursday night essentially amounted to backing Mrs May again to pass the agreement, when that had failed hugely in the past. One source added that EU leaders have little option but to support her.

Irish sources also conceded that the risk of a crash-out Brexit remained, though measures agreed by EU leaders on Thursday pushed that prospect into May.

Earlier, Mr Varadkar said there was an “openness” to an extension of article 50 to allow the UK to postpone next week’s Brexit date. However, EU leaders would have to hear from Mrs May before deciding on terms of the extension, he said.

Although some EU leaders have struck a harder note, Mr Varadkar repeated his line about “cutting the British some slack” that he used earlier when speaking to journalists. However, he stressed that if there was a crash-out Brexit next week, that would be the UK’s choice.

“I think we all appreciate that the situation in London is somewhat chaotic at the moment, and for that reason I think we need to cut the entire British establishment a little bit of slack on this,” he said.

“No deal can only ever be a British choice. Let’s not forget that the March 29th deadline was set by the United Kingdom in the first place, and it’s always up to them even at the last moment to revoke article 50 – they do not need permission to do that,” he said.

“So no deal, if it happens, will be a British choice and a British decision,” he added.

Asked what would happen if a third vote on the withdrawal agreement was defeated in the House of Commons next week, Mr Varadkar said: “I think we’ll just have to cross that bridge when we come to it . . . if the agreement doesn’t pass then we’ll have to hear from the British government and the British parliament as to what their plans are because bear in mind they’ve also said and voted for the fact that they don’t want to end up in a no-deal scenario in a few days time either.”

“We do need to see a resolution sooner rather than later,” the Taoiseach said.

He said now was the time for the British government and parliament to make difficult decisions on Brexit.

Minister for Foreign Affairs Simon Coveney said he was hopeful that the other EU 26 member states would agree to a short extension for the UK to avoid a crash-out Brexit amid suggestions that some EU countries might be unwilling to support such a move.

“I think we will have to wait and see how the [European] Council develops but I would be very surprised if the approach that president Donald Tusk outlined yesterday evening is not the line that is agreed and taken,” said Mr Coveney.

Speaking at an event in Cork to mark World Down Syndrome Day, he said he was unsure if Mrs May would receive sufficient support for her deal in the House of Commons next week.

“We just don’t know – that is the honest answer. There are conflicting messages emerging – it is very difficult for her, there is no question about that. There is a lot of division still within the British political system both within the political parties and across political parties.”

Meanwhile, the Fianna Fail leader Micheál Martin, who is in Brussels for a pre-summit meeting of the leaders of the alliance of European liberal parties, said he expected there to be an extension to article 50 next week.

However, Mr Martin warned of a growing crisis caused by the continuing chaos in the British political system.

“To be honest the view of prime ministers today is that there is a real sense of crisis,” Mr Martin said.

“There’s a real sense of an absence of a clear pathway to resolving that crisis right now. So I think they’re looking at a step by step approach, and that’s what you’re likely to see this evening and leading in to next week. And by the end of next week, if that vote doesn’t carry in the British parliament, then I think you’re into a very serious situation.”

Ireland, he said, must support an extension, warning that “a no-deal Brexit is probably worse than has been anticipated to date”.