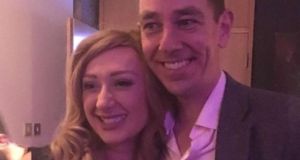 Paying tribute to the Ennis native, who died on Wednesday, Ms Phelan said: “Laura’s legacy is that she will have saved thousands of lives with her campaigning.”

The two women met a number of times and regularly communicated by telephone and social media. “I was struck by her positivity. I couldn’t get over how positive she was,” Ms Phelan said.

“I don’t think she realised the effect she had.”

Ms Brennan first contacted the HSE in September 2017 saying she wanted to advocate publicly for the HPV vaccine after receiving a diagnosis of terminal cervical cancer.

At the time the uptake of the vaccine was falling due to a campaign of opposition by some parents who alleged, without scientific evidence, their daughters were suffering chronic health conditions since receiving it. Uptake has since recovered from a low of 52 per cent at the time to 70 per cent now.

Ms Brennan said she was determined every parent in Ireland who was about to make the decision whether their daughter was to be vaccinated against HPV, would hear her story first.

“This illness is devastating and it’s going to take my life but the good news is there’s a vaccine that you can get that prevents it. HPV caused my cancer. I just wanted parents to know there is an alternative.” she said at the time.

“The point I want to make is a positive point and that is to say that her short life was one that had a big impact. She came to our attention, to my attention when she was a guest on the Late Late Show last April, she was just quite simply one of those extraordinary people that stand out.

“The words I would use to describe meeting her, because she was so striking, was kindness, and positive and empathetic and warm and relentlessly optimistic despite what she had to face. That’s what made her different, that’s why I remember as we stood together posing for pictures in the Green Room after the Late Late Show, I thought I was in the presence of something pretty special and I was.

“The reaction to that interview from people around the country was phenomenal and the reaction was to her clearly, to Laura and what she had to say and how she said it because when you’re down and the chips are down and when you’re struggling you can really go down one of two roads, you can either go ‘the world is conspiring against me, why me, I don’t want this to happen to me’ or you can go down the other road which says ‘this is my lot, and I’m going to do something with it.’

“Her great ambition in life was to work at a make up counter, she got it, she was obsessed, and I mean that in the right way with The Greatest Showman, she loved it, when she came on the show she walked on to the song This Is Me, one of her favourite songs. The other thing she wanted to do in life was to go to Copper Face Jacks and she did, she got to go, she got the gold card.

“I don’t how she did it, but she managed to get on the Toy Show and it was The Greatest Showman, and rightly so because she had a limited time on this earth. She knew she had between two and three, maybe four years, to love, but it was much shorter than that as it turns out, there were times when she came close to leaving this world and she fought back.”

Mr Tubridy urged that people not lose sight of the message about the importance of vaccination, “this was the message that Laura wanted to bring to the world, and she did.”

Speaking later on RTÉ radio’s Today with Sean O’Rourke show, Ms Phelan said that the increase in uptake of the HPV vaccine from 50 per cent to 70 per cent was “all down to Laura”.

Ms Phelan said: “I would love to have exact figures for her family. There is no doubt that she will have saved thousands of women from her fate. She didn’t want others to face what she had to.”

The CEO of the Irish Cancer Society, Averil Power said Ms Brennan had used her time to help so many people. “It took a huge amount of courage for her to contact the HSE (to offer to front an HPV vaccine campaign).

“She was determined that no other woman would have to go through what happened to her. She wanted to use her voice to help other women. Her voice will have saved thousands.”