Phone and internet use making teenagers unhappier than previous generations 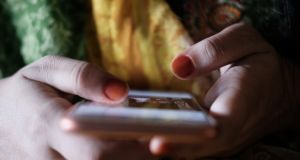 Teenagers who spend long hours browsing through social media and using their smartphones are significantly less happy and more likely to become depressed than previous generations of young people, a UN study has found.

Research carried out among teenagers born after 1995 in the US has found that happiness among American teenagers has declined significantly since 2012 while the time young people spend on screen activities has steadily increased.

The Sad State of Happiness in the United States and the Role of Digital Media report, released this week as part of the UN World Happiness study, argues that young people who spend more time with friends and family, exercising and sleeping are happier than peers who spend hours every day using the internet and smartphones.

It warns that those born after 1995 as part of the iGen generation are “markedly lower in psychological well-being” than millennials (born between 1980-1994) were at the same age.

Author of the report Dr Jean Twenge, professor of psychology at San Diego State University, notes that while happiness levels among young people increased between 1991 and 2011, both adults and adolescents said they were significantly less happy in 2016-17 compared to how they felt in the early 2000s.

Dr Twenge draws a strong correlation between these feelings of unhappiness and the rapid increase in the number of people using smartphones in recent years.

This rise in digital media use has resulted in teenagers spending less time with their peers socialising and going to parties, notes Dr Twenge, adding that the way adolescents spend time together has “fundamentally shifted”. She writes that depression, suicidal thoughts and self-harm have increased sharply among teens since 2010, particularly among young women and girls in the US and teens in the UK.

In 2017, the average 17/18 year old spent more than six hours a day using the internet, on social media and texting. By 2018, 95 per cent of US teenagers had access to a smartphone while 45 per cent said they were “almost constantly” online. Girls who spend five or more hours a day on social media were found to be three times more likely to be depressed than non-social media users while heavy internet users were twice as likely to be unhappy.

Young people who spend more time sleeping, interacting face-to-face with friends and attending religious service - activities which were more common among previous generations - tend to be happier than peers glued to their phones, the report underlines.

Many young social media users become depressed when comparing their lives to the glamorous “highlight reels” of other users while cyberbullying is another growing problem within the digital world, writes Dr Twenge.

Dr Twenge writes that the decline in happiness and mental health among young people and adults seems “paradoxical” given that the violent crime rate and unemployment are low in the US. “This is the Easterlin paradox: As the standard of living improves, so should happiness - but it has not.”

It’s not yet as clear whether the rise in internet and phone use among adults is also resulting in less time spent interacting face-to-face with friends and family and proper sleep time. However, given that adults now spend just as much time using digital media as teenagers it’s likely that the decline in adult happiness is also linked to online media, concludes the report.