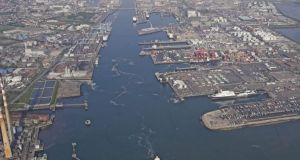 Dublin Port aims to reduce the number of cruise ships allowed in from 160 this year to 80 in 2021. Photograph: Dublin Port Company website

Cruise business at the port has been growing in recent years, much of it encouraged by investment from the Port Company. There were 150 cruise ship calls in 2018, there will be more than 160 this year, and there are 140 bookings already for 2020.

The Dublin Port Company also secured planning permission in 2015 to deepen berths in the harbour in a move that was expected to see the cruise business and cargo volumes increase.

However, CEO Eamonn O’Reilly told RTÉ Radio’s Morning Ireland the plan is to reduce the number of cruise ships allowed into Dublin from 160 this year to 80 in 2021 because of the need for increased capacity for container traffic when the UK leaves the EU.

It is necessary to ration available capacity, he explained, given the competition for berth spaces.

In May last year the port welcomed the arrival of the first “turnaround” liner – a cruise ship twice the size of Croke Park, to be based at the port. Turnaround business tends to involve passengers staying a night or two in the city before or after their cruise. Dublin city businesses were looking forward to an increase in this aspect of the business.

But huge growth in cargo volumes of some 36 per cent in the six years to 2018 has meant Dublin Port has had to plan to move all non-core activities from docks to a new “inland port” on land acquired near Dublin Airport.

The Port Company said it has a major programme of capital works in Dublin Port that will see investment of €1 billion by 2028, and that it was necessary to reassess the need for cruise berths, which are largely seasonal, against year-round cargo services.

The arrival of the Irish Ferries vessel WB Yeats in January and the impact of post-Brexit customs facilities are also understood to have heightened the need for additional space.

Mr O’Reilly said the Dublin Port company had a long discussion with Minister for Transport Shane Ross this week during which they discussed Brexit, borrowing and cruise berths. “The Minister expressed his concern and we explained our rationale.”

He said there was a choice to satisfy the demands of the cruise industry or the capacity to import.

Cruise ships use Alexandria Basin into which a new roll-on/roll-off operator will be moving, he added; this will handle twice the volume of freight business that currently passes through Rosslare Harbour.

Among the items being imported through this new service will be animal feed, cars and freight, all of which will be impacted by Brexit, he said.

When asked if the port is ready in case of a no-deal Brexit, Mr O’Reilly said they are “as ready as we can be.”

Eight hectares of land in the port has been “given over to it” and new border posts will be ready for March 29th.