EU agrees to give UK more time, but key House of Commons vote still due next week 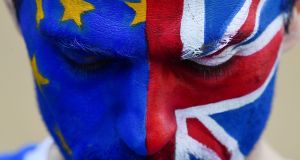 A man with painted EU and British flags on his face is seen ahead of a EU Summit in Brussels. Photograph: Toby Melville/Reuters 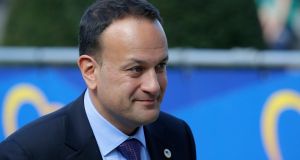 Where are we now?

On Wednesday, British prime minister Theresa May signalled formally to the EU that she wished to extend the Article 50 process , delaying the date on which the UK would leave the EU from March 29th to June 30th. This request was considered by the leaders of the other 27 EU countries during their meeting in Brussels starting on Thursday afternoon. They must approve an extension unanimously.

In a televised address from Number 10 Downing Street on Wednesday night, Mrs May sought to put the blame on MPs for the proposed delay, with an extraordinary attack on parliament in which she urged them to say what Brexit, if any, they want.

The president of the European Council, Donald Tusk – who as chair of the council of leaders runs the summits -– indicated the British must pass the withdrawal agreement in the House of Commons next week before an extension is granted.

However as EU leaders discussed the issue they appeared to move between a range of proposals, with contacts also under way with the UK prime minister to see what she would agree to. At one stage a May 7th deadline was proposed. However by late evening a proposal was agreed. If the House of Commons approves the withdrawal agreement, Brexit will happen on May 22nd. If not, the UK would leave with no-deal on April 12th – or could apply for a longer extension but likely under strict conditions, including the election of MEPs.

What did Mrs May say to EU leaders today?

You often hear the complaint from Brussels - with some justification - that nobody knows what the British want. But Mrs May said clearly what she wanted – ratification by EU leaders of an agreement at Strasbourg last week which includes the concessions and clarifications on accelerated talks on the future relationship and the temporary nature of the backstop, and an extension of the Brexit date from tomorrow week until June 30th.

The first won’t be a problem. But the second caused legal difficulties for the EU which favours a shorter extension, expiring before the European parliament elections at the end of May. Draft summit conclusions had suggested an extension to May 22nd, subject to the withdrawal agreement being passed.And after a number of other dates were discussed, this remained, but further details were added.

The risk of a crash out at the end of next week was taken off the table. However if the House of Commons votes down the agreement, then the UK could still crash out on April 12th. Or the option has been left open for the UK to seek a longer extension, subject to electing MEPs and, presumably, committing to find some new way forward. Meanwhile if the House of Commons does approve the deal, the EU would depart on May 22nd.

Entering the meeting,French president Emmanuel Macron laid down a clear marker, saying his view was that if the withdrawal agreement was not passed, then “we will be going to a no-deal.” However now the UK may have a little more time to do so.

What then happens if the House of Commons approves the withdrawal agreement?

If the withdrawal agreement is passed before the extension runs out then the UK leaves in a planned fashion. The UK would exit the EU and enter what is called the transition period, a kind of standstill in which pretty much everything will remain the same until at least the end of 2020 – except for the fact that the UK will have left. During this period the two sides will try to agree trading arrangements for the long-term.

What happens if May fails to get the deal approved?

It appeared going into the summit that Theresa May would have to get the deal approved next week, or face the real risk of a no-deal exit on March 29th.There was talk of an emergency EU summit next week – and possibly other options to avoid a no-deal crash.

Now the immediate heat is likely to be taken out of the situation,but only for a short time. If the House of Commons votes down the deal again, then it is all back in the melting pot. The longer timetable could also give time for political developments in the UK, with a majority in the Commons opposed to a no-deal exit and apparently shocked by May’s willingness to consider this option. But it remains to be seen if something emerges from the UK parliament.

How did today end up ?

As is normal, there are draft conclusions, agreed in advance by diplomats and government officials, circulating on the other aspects of the summit today. But there were no draft conclusions on Brexit and then the ones which did emerge changed, on a number of occasions.

Irish sources say two things: they haven’t seen this level of uncertainty about a summit since the Greek crisis.

This process has long been described by various sides as a game of chicken. If that is so, it only gets interesting at the end. And we are in the end phase now, even if there may now be a few weeks to run.