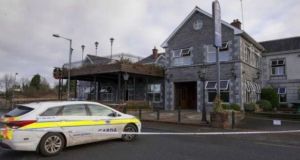 Shannon Key West hotel in Rooskey on the Leitrim-Roscommon border, after it had been damaged by fire a month ago, on January 10th. File photograph: Brian Farrell

A Government decision to scrap plans for a direct provision centre at the Shannon Key West Hotel in Rooskey on the Leitrim/Roscommon border has been broadly welcomed locally.

However, one campaign group has described the decision by the Department of Justice not to ahead as a victory “arsonists” who targeted the disused hotel in two recent attacks.

The hotel, which closed in 2011 and was set to open as an accommodation centre for 80 asylum seekers, was first attacked in January with significant damage caused. A second arson attack on the same building in mid-February was described by local gardaí as premeditated and carefully planned.

No one was injured in either incident and gardaí are continuing their investigations into the incidents.

In a statement released on Thursday, the Department of Justice said it was no longer in a position to proceed with the plans to open an accommodation centre at the hotel.

The decision was made following legal advice sought from the Chief State Solicitors Office which found “difficulties with the lease agreement between the owners of the hotel, and the operator renting it, which made proceeding with the proposed centre unviable”.

The statement stressed the department was not party to these lease arrangements and that the matters were “outside our control”. It added that the decision not proceed with the planned centre was taken “solely in relation to the difficulties with the lease”.

“We remain committed to sourcing suitable premises to meet the accommodation needs of people in the international protection process,” the statement read. “A regional procurement process is underway and will continue throughout the year.”

The property has been at the centre of High Court proceedings taken by a group of investors Paradub Limited, which wants to develop it as tourist hotel, and the owner James Kiernan.

Paradub claimed it entered in 2016 into an agreement to buy the hotel for €600,000, and began a High Court action in 2017 which was contested by Mr Kiernan. Following negotiations between the parties contracts were exchanged last December with an option to complete the sale.

The project had also been the subject of an appeal to An Bord Pleanála on the issue of whether a change of use of the hotel required planning permission. The planning board was due to give its ruling on June 25 next.

Community leaders said a hotel was regarded as the cornerstone of their plan to revitalise the village on the Roscommon/Leitrim border which was devastated when fire destroyed a local factory in 2002 , with the loss of several hundred jobs.

The cathaoirelach of Leitrim county council, Sean McGowan said “ I think the overwhelming feeling locally today is that people are pleased. They are not jumping up and down but they are hoping it can now re-open as a hotel.”

Mr McGowan said that while most locals were not in favour of the hotel being adapted as a direct provision centre “people were outraged at the arson attacks. The people of Rooskey are genuine law abiding people and would have no hand, act or part in anything like that”.

Rooskey farmer and community activist Gerry Gearty agreed that the overall reaction was one of relief “and that is not because anyone has anything against asylum seekers or refugees”.

“There are no facilities in Rooskey for asylum seekers,” he said “The medical facilities ar e already stretched , there is no public transport, and hardly any recreational facilities”.

Mr Gearty said 20 years ago Rooskey had been a vibrant village but the loss of the hotel and a local restaurant meant that boats on the Shannon no longer had any reason to stop there.

Asked whether he had concerns that the decision might be interpreted as a victory for the arsonists, Mr Gearty said: “I can guarantee you that nobody within an ass’s roar of Rooskey had anything to do with those attacks because we all know the damage the last big fire here did to Rooskey”.

However, Leah Doherty of the Leitrim and Roscommon United Against Racism Group which held anti-racism rallies in the village following two recent arson attacks on the hotel, expressed concern that the Government’s decision would be seen as a victory “for the arsonists and the racists”.

Ms Doherty said the Government should have awaited the results of the challenge to An Bord Pleanála and other legal proceedings before taking this step.

“The Government has no choice now but to scrap direct provision and house people in communities,” she said. In Rooskey, the Government had succeeded in “pitting one vulnerable group agains t a community”, she added.

The arson attacks at Rooskey followed another fire which broke out at the Caiseal Mara Hotel in Moville, Co Donegal in November 2018 which was also due to open as direct provision centre for 100 people.

More than 300 recently arrived asylum seekers are currently staying in emergency beds at hotels in Cork, Dublin, Laois, Louth and Waterford due to a lack of available spaces in direct provision centres while the former Mosney holiday camp in Co Meath is significantly oversubscribed, according to data released by the department last month.