People with disabilities and their families are ‘routinely disrespected’ 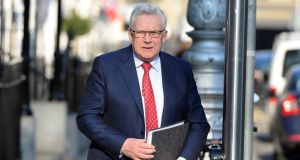 Deputy Fergus O’Dowd told an Oireachtas committee he was ‘angry that people have to fight so hard for their children and they are treated so disrespectfully’. File photograph: Dara Mac Dónaill

People with disabilities and their families are being routinely disrespected by local authorities, an Oireachtas committee has been told.

Co Louth, Fine Gael TD Fergus O’Dowd said he was aware of letters which issued form a local authority which used unnecessarily formalised language including the expression “the disabled person” to refer to a named child whose family were seeking some supports.

Mr O’Dowd said it was insulting to a family who laid out a detailed explanation of their named child’s disability and needs to be turned down in a letter which they felt has not paid sufficient attention to the needs of the family. It was also disrespectful to refer to the named child as “the disabled person”.

He said information on the possibility of an appeal had been included, almost as an afterthought and the overall effect on the family which was striving to meet its needs was “not showing due respect for people with disabilities, a mother or a child”.

“I’m angry that people have to fight so hard for their children and they are treated so disrespectfully,” he said.

Mr O’Dowd said local authorities generally needed to alter the language used when dealing with people with disabilities. He also said he hoped in future there might be a person with disabilities on the board of the National Oversight and Audit Commission.

He was speaking during a presentation on Local Government Performance Indicators for 2017, by the commission.

The commission audits local authorities every year but its head of audit, Martina Moloney, said some local authorities were better than others in publishing the audit findings. She said audit reports for each year were completed in October the following year, but while some councils put the audits on their websites immediately, others delayed them until the following year, meaning the relevance was sometimes weakened.