‘I don’t believe the British government has any appetite for an inquiry,’ says O’Loan 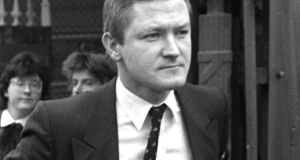 Belfast solicitor Pat Finucane: Four of Northern Ireland’s political parties have united to call for a public inquiry into the murder of the Belfast solicitor.Photograph: Pacemaker

Statements from the North’s Police Ombudsman and the PSNI Chief Constable Simon Byrne appear to challenge the British government’s explanation for why it has not ordered a public inquiry into the murder of Pat Finucane.

The former police ombudsman, Baroness Nuala O’Loan, said she did not believe the British government had the appetite to call an investigation into the 1989 murder of the Belfast solicitor, even though one was merited.

In 2012 a review of the murder by British lawyer Sir Desmond de Silva QC found agents of the British state were involved in the murder and that it should have been prevented. Sir Desmond, however, said there had been “no overarching state conspiracy” in the killing.

This was rejected by the Finucane family who believe there was high-ranking political and security service involvement in the murder.

On Monday the Northern Secretary Brandon Lewis said he had decided “not to establish a public inquiry at this time” but that he was not “taking the possibility of a public inquiry off the table at this stage”.

Mr Lewis referred to investigations by the current Police Ombudsman Marie Anderson and by the PSNI in his House of Commons statement.

He said it was “important” to allow the PSNI and ombudsman “processes to move forward, and that we avoid the risk of prejudicing any emerging conclusions from that work”.

Statements from Ms Anderson and Mr Byrne, however, appear to question Mr Lewis’s view that the PSNI and ombudsman inquiries must first be completed before he could definitively rule on whether to hold a public inquiry.

The Chief Constable, Simon Byrne, said it was the PSNI’s view that there were “currently no new lines of inquiry” and the police “now need to decide if a further review is merited given all the previous investigations into this case”.

The ombudman, Ms Anderson, said her office had no current investigation taking place where the murder of Mr Finucane was the central issue.

“At this stage, events connected to the murder of Pat Finucane are not central to any of our ongoing investigations,” she said.

A senior source explained that while the ombudsman was investigating some police activity relevant to Mr Finucane, none of it was pertinent to his murder.

Former police ombudsman Baroness O’Loan made a similar point, noting how the ombudsman deals specifically with complaints against or possible misconduct by the police. Its remit did not address the central complaint of the Finucane family that there was collusion in Mr Finucane’s murder that allegedly implicated the British security service and its handlers and agents.

The Finucane family also wants to know whether and how high this alleged collusion went up the British government’s chain of command.

Baroness O’Loan queried why Mr Lewis would cite the ombudsman and the PSNI as reasons for not calling an inquiry.

“I don’t understand why he is saying there are things which need to be done before the issue of whether there is an inquiry can be addressed; I just don’t understand that,” she told The Irish Times.

“There is every justification for saying there should be an inquiry into the collusion which has been admitted in the context of Pat Finucane’s murder,” she added.

Baroness O’Loan, however, was pessimistic about an inquiry ever being called. “I don’t believe the British government has any appetite for an inquiry,” she said.

Meanwhile, the Finucane family are to seek the support of US president elect Joe Biden in their continuing campaign for an inquiry.

“We will be seeking his fresh support on this matter and I think that we can enjoy a degree of confidence that, given the bipartisan way in which we have received support from America, this is something that may well enjoy his future support,” he told the BBC.

Sinn Féin, the SDLP, Alliance and the Greens have written to Mr Lewis also arguing that his reference to the PSNI and ombudsman as an explanation for not calling an investigation were “neither a credible nor a tenable position”.

The respective senior members of the four parties – Michelle O’Neill, Colum Eastwood, Stephen Farry and Claire Bailey – urged him to reconsider his decision and call an inquiry.