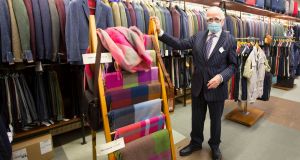 John Mullaney (88) back at work in the family store Mullaney Brothers in Sligo. Photograph: Brian Farrell

Being “back to normality” means different things for different people when it comes to shopping. For many of the 100 or so hardy souls who queued from 6.30am outside Penneys in Sligo on Tuesday it meant being able to buy matching his and her Christmas pyjamas, apparently a favourite kickstart to the annual shopping splurge for many.

For John Mullaney, dapper as ever in his trademark pinstripes, it meant something completely different.

“It’s a delight to be in a suit again after the sloppy dressing of the last six weeks,” said the 88-year-old as he pointed customers in the direction of the Donegal tweed and the Aran sweaters at the landmark family store on O’Connell Street, where he has worked since 1950.

The mood was upbeat as shops reopened in Sligo, not least because the roadworks are finally gone on the town’s Main Street, with the completed refurbishment adding to the celebratory mood.

Shoppers were out in force, and the Wine Street car park in the centre of town was full by mid-morning. The mood among both traders and the public was one of guarded optimism as people mostly obeyed the rules around wearing face masks, even on the street, and social distancing.

In the Quayside Shopping Centre one woman struggling under the weight of several bags politely declined to be interviewed.

“I am not supposed to be here,” she said, probably not the only shopper for whom a face mask was providing very valuable anonymity.

Simon Costello and Stephanie Kennoy, two frontline workers on a morning off, were enjoying the hustle and bustle on the streets.

“It’s good to be back, to get out of the house,” said Simon, a firefighter. He knew people who were in the queue for Penneys at 7am but he wasn’t quite that enthusiastic himself.

The pair were not worrying about the risk to their health if shops got too crowded. “It is what it is, If you are going to get it, you’ll get it,” said Stephen.

Stephanie, a shop employee, reckoned it is wrong to keep some pubs closed. “I can guarantee you there will be loads of house parties, and that will defeat the purpose.”

Bernadette Smith from Sligo had Christmas presents in mind as she started with some window shopping. “It’s great to see the shops open. It’s been like a ghost town for the last few weeks.”

With cafes still closed apart from takeaway services, Margaret Leyden from Dromahair was lucky to find a bench for her coffee and cigarette break.

“I come into Sligo every Tuesday for grocery shopping, and recently there wouldn’t be a dozen cars in the car park, but its chock-a-block today,” she said happily. “I’d say it will be bedlam until Christmas, but the weather is nice and mild and everyone is in good spirits.”

John Mullaney, whose father Michael started working in the family store Mullaney Brothers in 1895, was very happy that he has new neighbours on O’Connell Street. “It’s great to see the street looking so well, and we have two new shops and a new coffee shop opening just across the road.”

He stressed that business had continued for many despite the Level 5 restrictions. “We have been posting Barbour jackets all over the country.”

A few doors away Richard Wehrly said it was surprising what people will buy online – although he stressed that for his jewellery business the face-to-face experience is hard to beat.

“We were doing click and collect – and, yes, we did sell a few engagement rings in the last six weeks.”

He said taking a chance on the size was not a new phenomenon. “In fact in 85 per cent of cases the guy still buys the engagement ring on his own as a surprise. But our product is very tactile and people want to see it and touch it, and it is great to be back.”

Wehrly Brothers has spent €10,000 preparing, with new screens in place along the counter and a new bigger “engagement room” for those couples who believe that a diamond should never be a surprise. Given that 40 per cent of their business is done during November and December, Richard Wehrly said they were “very grateful” to have the doors open for the main shopping period.

In EJ Menswear Tom Clarke was also beaming, and said that while there might be “a bit of nervousness” among both staff and customers, safety precautions were reassuring for everyone.

“I think maybe after the first lockdown we overdid it with arrows and signs, so much so that we caused confusion for ourselves and customers. Now we have the iPad inside the door which takes everyone’s temperature as they enter but no issue so far. We were thinking we might have to put a cooked chicken in front of it to see how it actually works.”

In what may be a cruel twist of fate for some retailers EJ has found its online sales kept all its full-time staff employed for the last six weeks.

“We have been building up the website for five years and with probably 200 menswear shops having closed since all this started, there was a lot of new business out there,” said Clarke.

At the Carraroe retail park on the outskirts of Sligo men were risking serious injury as they struggled out of shops with Christmas trees and large flat-screen televisions.

Aidan Doyle of Sligo Chamber of Commerce welcomed all the activity.

“There’s a lot of positivity around. We had a few new shops opening today, the work on O’Connell Street finished a month ago, and we have been pushing the ‘shop local’ message with the help of the transition year students at the local Mercy college.There’s a lot of good will out there for local shops.”