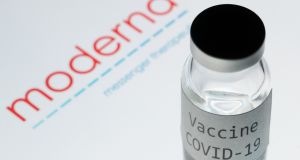 The Cabinet has given the go-ahead for the Department of Health to purchase the Moderna vaccine. Photograph: Joel Saget/AFP

The Cabinet has given the go-ahead for the Department of Health to purchase some 875,000 doses of the Moderna Covid-19 vaccine.

Minister for Health Stephen Donnelly received approval from today’s Cabinet meeting to enter an advanced purchase agreement when the vaccine become available in the coming months.

This is the fifth agreement that the Government has concluded with pharma companies who are racing to produce a vaccine for the Covid-19 virus. The others are with AstraZeneca (Oxford vaccine), Janssen, BioNTech/Pfizer and CureVac. The EU is still in advanced negotiations with Novavax, another pharmaceutical company.

“The recent announcements from several vaccine manufacturers offer a beacon of hope to all as we look to 2021. We await further evidence of the safety and efficacy of these vaccines,” the Department of Health said in a statement.

US company Moderna requested emergency clearance for its coronavirus vaccine at the European Medicines Agency on Tuesday, after a new analysis showed the vaccine was highly effective in preventing Covid-19, with no serious safety problems.

The primary analysis, which included 196 cases, found the vaccine was 94.1 per cent effective, in line with preliminary findings released earlier this month.

In the Dáil, Taoiseach Micheál Martin said he will give “some consideration” to a call by the Labour party for a dedicated minister to be in charge of a comprehensive roll-out strategy for delivery nationally of the vaccination programme.

Labour leader Alan Kelly insisted that one person needed to be in charge politically of the issue which he believed would take a year.

The Labour leader said Mr Donnelly had “enough to be doing” as had other Cabinet Ministers when he pleaded with the Taoiseach to appoint one Minister to deal specifically with the issue, who would be answerable to the Cabinet.

The Taoiseach said he had established a Covid-19 taskforce which his department co-ordinates to ensure “the national priority that attaches to the issue”.

Mr Martin said the high-level task force is working with the Department of Health and the HSE to develop a national Covid-19 vaccination strategy and implementation plan which will be ready by December 11th for for consideration by the Government.

He said the committee was looking at procurement, storage, distribution and the IT infrastructure to back it up. Communications as an issue would probably also be part of the analysis involved.

Mr Kelly said “logistics is going to be massive” as would the rules be on “who’s going to get what and when”.

The Tipperary TD said there would also be an issue around whether people who do not get vaccinated being allowed into “public events, public spaces” and how rules would be devised around that.

“Then (there is) the whole issue of IT. How are we going to have passports? I’ve seen passport technology and how it goes on your phone and the rules around how long that lasts,” he said of proposals that travellers should have proof of vaccination to allow international travel.

Mr Kelly added that a “huge amount of analysis” would have to be done on a health passport which would require using individuals’ PPS numbers and that would have to take in “a whole load of other aspects”.

He paid tribute to the Government taskforce the Taoiseach had established but he said “there needs to somebody who is politically over all this” and to ensure all the agencies involved are not going to be “second guessing” because of their other work. “I plead with you to do this,” he said.

There needed to be one person in charge and “they will do the State some serious service”.

The Taoiseach told him he would reflect on Mr Kelly’s proposal but he said “those on taskforce have to report to the Taoiseach to ensure prioritisation across Government and agencies”. He said they were drawing on expert advice and on the expertise of other departments and on the private sector “to get this vaccine out as efficiently as we can”.

While there is intense speculation about when the vaccine will be available, no firm date has yet been set, as it is conditional on approval from the European medicines agency.

The taskforce is focusing on approval issues, as well as delivery, storage, the training of the workforce to administer the drug, and the order in which people are to be immunised - known as “prioritisation”.

It is understood that the National Public Health Emergency Team (Nphet) is to advise the taskforce on prioritisation. Mr Donnelly has said it is likely that healthcare workers and vulnerable cohorts will be first to receive the vaccine, but the taskforce is also likely to be informed by approaches in other countries, which have included age criteria as well.

The method of delivery is also to be considered, again informed by other countries - for example Germany, where a combination of mass vaccination centres and mobile units has been proposed. The strategy will also be drawn up in response to the properties of different vaccines and how they need to be stored and administered.

In addition to civil servants, State agenices, logistics experts and Nphet, it is understood the taskforce will be supported by pre-existing structures such as the National Immunisation Advisory Committee (NIAC). The Government said last night the taskforce is on course to deliver the national strategy by its stated goal of December 11th.

Moderna and Pfizer-BioNTech are in a tight race to launch their Covid-19 vaccines in Europe after both applied for emergency EU approval on Tuesday.

The applications to the European Medicines Agency (EMA) came a day after Moderna sought emergency use for its shot in the United States and more than a week after Pfizer and BioNTech did the same.

US drugmaker Pfizer and its German development partner BioNTech said their vaccine could be launched in the European Union as early as this month. “We can start to deliver within a few hours (of an approval),” said Sierk Poetting, head of operations and finance at BioNTech. “We have been stocking up. And everything that is there can really be distributed within a few hours.” The EMA clouded the timeline, however, when it said it would complete its review for that vaccine by December 29th at the latest, and for Moderna’s shot by January 12th. It added its schedule may be subject to change as its evaluation proceeds.

The European Commission said it would likely give its final authorisation for a vaccine’s rollout days after a recommendation by the EMA. –Additional reporting Reuters