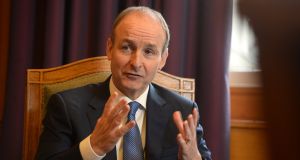 Taoiseach Micheál Martin says there are ‘limits to which a government can lock people up for a prolonged period of time’.Photograph: Dara Mac Dónaill/The Irish Times

The Taoiseach has said he does not anticipate new Covid-19 restrictions before Christmas and has described the 400 daily cases figure that Nphet has set as a threshold for action as “very arbitrary.”

Nphet said in a letter to the Government last week that it would be possible to suppress the spread of the virus with a three-week intervention only if it begins as cases approach 400 a day.

The five-day average of new cases stood at 277 on Monday.

Micheál Martin said the Government was not just watching the figures on new cases but also the level of hospitalisations, ICU admissions and deaths in deciding on imposing any restrictions.

He said the State was the best performing in Europe on the seven-day average of new cases.

“We want to stay in that position, so we won’t be slow to react, but we don’t anticipate having to do it before Christmas,” the Taoiseach told the Irish Times in an interview on Monday.

On Tuesday the country moved from Level 5 to Level 3 restrictions with the reopening of non-essential retail and other public amenities but household visits remain restricted until December 18th.

Mr Martin said the expectation was that cases would continue to fall this week due to the lag from remaining restrictions.

He said an increase in cases after the Government permitted household visits for Christmas after December 18th would depend on people’s behaviour.

“It’s now for all of us individually and collectively in our behaviour to manage this virus and to get the virus down and that’s particularly true from the 18th onwards,” he said.

The Government was “more comfortable” about reopening museums, libraries or galleries without this leading to a spread of the virus and this would improve quality of life over Christmas, he said.

“There are limits to which a government can lock people up for a prolonged period of time, to be crude about it, and we have to get the balance right. This is about balance,” he said.

Nphet has argued that if socialising and household mixing took place “a third wave of disease will ensue much more quickly and with greater mortality than the second.”

Mr Martin acknowledged that the Government’s plan to ease restrictions was “a bit of a trade-off” but that if the Government had to bring in further restrictions “that can really nip the spread of the virus, then we would be prepared to do that.

“The message really is to people to watch your behaviour, and every contact counts,” he said.

Nphet advised Government in a letter to the Minister for Health Stephen Donnelly last Thursday that it “will be important to intervene early to bring transmission back under control.”

The health officials said that the 400 cases per day threshold would be breached sooner than January if restrictions are eased at a level where cases are higher in early December than the original starting point of less than 100 cases a day.

Mr Martin said the Government understood that there was a level of new cases where the virus then grows exponentially and that it would “keep an eye” on this figure.