Some 27 animals seized after garda led operation into farm 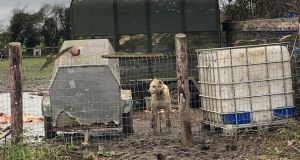 A man has been arrested during an operation in which 23 dogs and four horses were seized by gardaí and animal welfare officers having been found in a neglected condition on a farm.

The animals were rescued during a planned search at the farm in Co Kilkenny on Monday. At least one animal carcass was found on the farm.

The arrested man was detained at the scene by gardaí after allegedly trying to frustrate the search of the property.

As well as the seizure of the animals, their health and the conditions on the farm where they were found were recorded by investigators as part of an ongoing criminal investigation.

The search of the farm was carried out under a warrant obtained on suspicion that the animals were being kept in circumstances which breached the Animal Health and Welfare Act.

A team of uniform gardaí and detectives, based in Kilkenny, searched the premises as part of a large team that also included a variety of animal welfare professionals.

These included personnel from the Kildare Society for the Prevention of Cruelty to Animals, Kilkenny County Council, My Lovely Horse Rescue, a local veterinary surgeon and dog rescue personnel.

“A full investigation into serious breaches of the Animal Welfare Act is underway. Kilkenny gardaí­ wish to sincerely thank all those who assisted today and those who are endeavouring to rehabilitate these animals.”