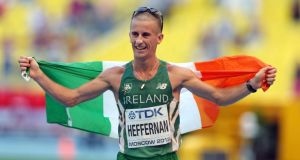 He may be used to getting around Leeside and the world on foot but when five times Olympian walker, Rob Heffernan steps out as Grand Marshall for Cork’s St Patrick’s Day Parade next Sunday, he can sit back and relax as he will chauffeur driven around the streets to greet crowds expected to top 50,000.

Accompanied by his wife, Marian and children, Mr Heffernan will lead the St Patrick’s Day Parade which starts on the South Mall at 1pm and makes its way up on to the Grand Parade and down St Patrick’s Street before finishing up at the end of Merchant’s Quay near Parnell Place.

“I am very proud to be from Ireland but even prouder to be from Cork. Throughout my sporting career, I have always promoted how wonderful Cork is and I am very honoured to be the Grand Marshal of the Cork St. Patrick’s Day Parade this year,” said Mr Heffernan from Ballyphehane on Cork’s Southside.

Lord Mayor of Cork, Cllr Mick Finn, who will be among a group cycling in the parade, pointed out that Rob Heffernan is the only Irish male athlete to hold a medal from the World Championships, the European Champions and the Olympics.

“We are delighted that Rob is bringing his story of Cork to this year’s St Patrick’s Day Parade. We are immensely proud to be the hometown of Ireland’s only five-time Olympian. Rob competed in the 2000, 2004, 2008, 2012 and 2016 Olympics which is quite an achievement,” said Lord Mayor Finn.

“His three golds at World Championship level, his European successes and his multiple national records for race-walking bring such pride to the city he so obviously loves. On the day when Ireland is celebrated the world over, it is fitting that Cork celebrates one of our most internationally successful citizens.”

Lord Mayor Finn revealed that his year’s St Patrick’s Day Parade in Cork will see over 2,000 participants from more than 50 groups taking part in the parade which will see a number of American marching bands from Indiana, North Dakota, Colorado and New York take to the streets of Cork.

The theme of this year’s celebration is “Stories of Cork” and the parade reflects this with invitations to local community organizations to express their Irishness while it also provides an opportunity for visitors to see why Corkonians are so proud of their city, explained Lord Mayor Finn.

The popular Dowtcha Puppets will entertain the crowds with their flock of Cork Gulls while the equally popular Cork Community Art Link will present a series of very Cork buildings, developed with local groups such as Enable Ireland, that will roam the streets of Cork, he said.

“We also have national arts organisations like Waterford performance art group Spraoi, which will celebrate the origins of the word “langer” by unleashing a “langur monkey” on to the streets while LuxE will tell the story of Sunniva, the Cork princess who became the patron saint of Western Norway. ”