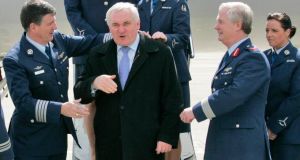 Then taoiseach Bertie Ahern before boarding the Government Jet at Casement Aerodrome in April 2008 with Lisa Smith on the extreme right. Photograph: Colin Keegan/Collins, Dublin

An Irish woman, suspected of involvement with Islamic State in Syria, cannot legally be stripped of her citizenship, security and justice sources say.

Lisa Smith, a Dundalk native, moved to Syria via Tunisia several years after leaving the Air Corps where she served as a flight attendant on the Government jet. She had previously served in the Army with the 27th Infantry Battalion.

Details of an Irish woman in Syria first emerged after a television crew working for ITV News visited a camp in the north of the country about two weeks ago.

They interviewed a woman wearing a burka who claimed to be British but had an Irish accent. She was part of a group of people fleeing the town of Baghouz in northern Syria, the last significant hold-out of Islamic State, also known as Isis, forces in the country.

The town is currently under assault by the US-backed Syrian Democratic Forces (SDF) causing thousands of civilians and Isis members to flee the area.

Sources on Sunday confirmed the woman in the video was Ms Smith and that she had been in a relationship with an Isis fighter.

It is understood Ms Smith and her two-year-old child are currently in the al Hawl refugee camp which is administered by the SDF. The camp holds about 30,000 refugees from Isis and the Syrian civil war, and according to media reports, is desperately short of resources.

Ms Smith and her child are being held in a sub-camp with about 500 other wives and children of Isis fighters. The secure area was set up by camp authorities following violence between Isis supporters and other refugees.

Most of those in the sub-camp are foreign nationals including, until recently, Shamima Begum, who travelled from London to join Isis when she was 15. Ms Begum’s case sparked debate in Britain.

The father of Ms Smith’s child is a UK national who was recently killed. It is believed Ms Smith was married to this man, but it is not clear if she provided any further support to the terrorist organisation.

Irish security sources confirmed Ms Smith had been placed under surveillance in 2011 while still a member of the Defence Forces.

She resigned from the Air Corps that year shortly after being denied permission to wear a head scarf while on duty. It is understood around this time she became radicalised through contacts with Islamic extremists both in person and on Facebook.

She left for Syria in either 2014 or 2015 and settled in territory controlled by Isis.

On Sunday, Government officials including Minister for Justice Charlie Flanagan indicated she would be allowed return but could face serious charges here, depending on her actions in Syria. However, Mr Flanagan acknowledged any prosecution would be “very challenging”.

There have already been calls for the Government to strip Ms Smith of her citizenship. In recent weeks the UK government has stripped citizenship from two so-called “Isis brides”, including Ms Begum.

First, Ms Smith is an Irish citizen by birth. Last year the Department of Justice established a system to revoke citizenship from those who obtained it through fraud or broke the oath of loyalty they took when it was granted.

Ali Charaf Damache, an Algerian-born national, became the first person to have his citizenship revoked following his conviction in the US for supporting Islamic terrorism. He is currently challenging the decision.

As Ms Smith did not have to apply for citizenship or take an oath, there is no way to legally revoke it, officials said.

The second barrier is the 1954 United Nations Convention on Statelessness to which Ireland is a signatory. The convention states no person can be stripped of citizenship if it would leave them stateless.

Although Ms Smith married a UK man in Syria there is no evidence she applied for UK citizenship based on this marriage. It is also highly unlikely such an application would be entertained given the circumstances of the marriage.

Furthermore the marriage itself would likely be considered invalid, having taken place under Isis rule.

Mr Flanagan said he believes Ms Smith is keen to return to Ireland and that “every effort will be made by Irish authorities to ensure she gets home”.

However, he said the Government is unlikely to send officials to Syria to assist Ms Smith due to the dangerous security situation there.