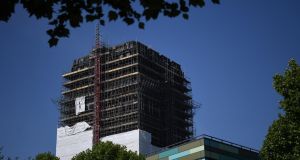 The remains of Grenfell Tower in London, after a fire broke out in June 2017, killing 71 people. File photograph: Neil Hall/EPA

One of the largest property management companies in the State has said significant fire-safety issues were discovered in “almost all” of the 60 apartment developments it included in a recent survey of blocks it manages.

The company, Keenan Property Management (KPM), said it had decided to undertake the survey in the aftermath of the June 2017 Grenfell Tower fire in order to address residents’ concerns about fire safety in their homes here.

A spokesman for KPM said the company manages a portfolio of some 20,000 apartments around the country. Based on its experiences, the company estimates there are likely to be fire-safety issues in between 70 and 80 per cent of the apartment housing stock.

“We have looked at circa 60 developments, and what we’re finding is inadequate fire alarms, outdated fire-alarm systems, a lack of fire stopping throughout the building(s),” a spokesman for the company said.

The survey also revealed a lack of proper compartmentation which allows for the escape of fire and smoke. “If you have the fire igniting, the lack of compartmentation adds to the spread, and then poor alarm systems don’t let residents know what’s going on.”

The company also drew attention to what it said was a widespread lack of fire-detection technologies in car parks. This, it said, presented a particular risk.“You have anything from 20 to 300 cars in the car park all full of fuel, and most of the bin stores.”

“[People should be] extremely worried,” the spokesman said. “The bottom line is that people don’t know how bad their own buildings are.”

The company said that fire-safety issues are just one of the problems residents are faced with. “The lack of adherence to original planning around fire safety goes hand in hand with poor workmanship – water ingress, poor-quality roofing, poor drainage, design, that kind of thing”.

KPM also said that it faces a litany of issues in managing legacy problems, including delays in obtaining original planning drawings from local authorities when the original developer or architect at a project has gone bust.

The company’s spokesman also criticised the current legal system for managing apartment blocks. Under current regulations, a corporate entity called an Owner’s Management Company (OMC) is responsible for the upkeep and safety of a development.

All property owners in a project are automatically made members of the OMC, and its directors and officers are drawn from this pool of people.

Often, KPM said, this results in laypeople with little expertise facing severe and complex legacy problems and being overwhelmed by the task. “They are voluntary, often they aren’t aware of their responsibilities and, for the most part, are in denial of issues in their own buildings because of the financial outlay involved.”

The spokesman said that sinking funds created to pay for issues are “totally inadequate”, putting the onus on OMCs and apartment owners to pay for repairs.

“At the moment there’s no redress scheme, you have owners being left to pick up the tab, which is adding to the problem of owners not progressing with the remedial works, because the money’s not there.”

Last week, Minister for Housing Eoghan Murphy told the Dáil that “building standards were not complied with during the boom-time years” but that “the difficulty we have is that there is a significant risk to the taxpayer if the Government accepts liability for individual buildings or works”.

“Of course we want to find a pathway to help these people, but it is difficult to see one that does not take on this enormous open-ended liability on every other taxpayer in the State that the State simply could not meet.”