Officials to meet British counterparts over onward export of greyhounds 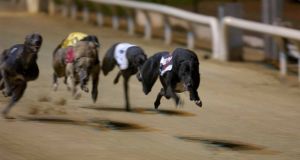 Irish officials plan to meet their British counterparts over the issue of Irish greyhounds being exported via the UK to third countries, the Minister for Agriculture has confirmed.

Michael Creed said that the RTÉ Prime Time Investigates documentary “Greyhounds – Running for Their Lives” made for shocking viewing in terms of how some Irish greyhounds ended up in China and Pakistan where animals can be treated cruelly.

The RTÉ programme claimed that overbreeding in the Irish greyhound industry was leading to surplus dogs being culled or exported to Britain from where many were moved on to third countries.

Mr Creed said programme made for appalling viewing and he believed that the majority of people involved in the Irish greyhound industry “would be offended by what they saw”.

He said that in the course of preparing recent legislation to allow for greater traceability of greyhounds, now enacted into law, the Department of Agriculture had obtained advice from the Attorney General with regard to the export of dogs to the UK.

“We have clear Attorney General advice that we can’t prohibit the export of greyhounds from here to the UK and what is clearly happening is that greyhounds are being dispatched from the UK to third countries such as China and Pakistan.

Mr Creed said officials from his department and from the Irish Greyhound (IGB) UK counterparts regarding the onward export of Irish dogs.

“There is an overbreeding of dogs here, as the programme clearly showed, and some of that pressure in the Irish industry has been taken off by the export market to the UK and, as is abundantly clear, from the UK onwards.

“Dogs with Irish registration studbooks are turning up in third countries and we’re going to talk to the UK authorities about that. I’m not saying what is happening here is acceptable but what is happening in China and Pakistan is horrific.”

Mr Creed said officials from his department and the greyhound board would also address the issue of greyhounds being put down by people other than registered vets. The programme showed some dogs being shot at knackeries.

Asked if there was a need for more rigorous inspections of knackeries, Mr Creed said it was noteworthy that one knackery hid a dog because a Department of Agriculture inspector was calling.

“We have an inspection regime in place and we will be going through all the footage from the programme now and where there is illegality, there will be consequences and prosecution,” he said.

“I would hope it would apply too to the IGB where people have broken its rules. Under the IGB’s own code of conduct, there is a requirement for a vet to attend where any dog is being euthanised for reasons of ill health, injury or life cycle.”

Mr Creed said the problem with regulation to date has been that there hasn’t been sufficient traceability but the new legislation signed into law by President Michael D Higgins gave the greyhound board greater ability to trace dogs.