Eir says it could have delivered broadband for €512m State subsidy

Figure in letter to Minister is significantly below current projected €2.97 billion subsidy 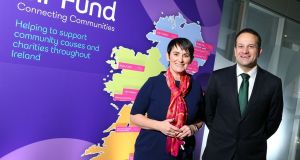 The €512 million subsidy figure is contained in a letter sent by Eir chief executive Carolan Lennon (Pictured here with Taoiseach Leo Varadkar) to the Department of Communications. Photograph: Marc O’Sullivan

Telecoms company Eir could have delivered the National Broadband Plan (NBP) for a government subsidy as low as €512 million, according to a letter from company.

This figure is significantly below the current projected €2.97 billion government subsidy for the preferred bidder in the €5 billion National Broadband Plan. However, according to Eir, delivering on the €512 million figure would have required changes being made to the process and some restrictions relaxed.

The €512 million figure is contained in a letter sent by Eir chief executive Carolan Lennon to the Department of Communications, Climate Action and Environment last week, and seen by The Irish Times.

The figure is based on a financial analysis conducted by Eir shortly before it left the National Broadband Plan bidding process. Ultimately the company’s indicative bid in the original bidding process was €2.751 billion, as was disclosed in the Dáil by Taoiseach Leo Varadkar last week.

However, the financial analysis undertaken before Eir dropped out of the bidding process, and now shared with the Department, uses two alternative cases which allowed the company to “(use) more commercial assumptions and better leveraging our existing infrastructure would have produced a subsidy requirement of between €0.5 billion and €1.5 billion.”

In the letter, Ms Lennon also suggests that staying in the race for the National Broadband Plan could have had a “catastrophic” impact on Eir’s business. The telecoms company states that the strict rules covering the national broadband plan would have had a “contagion” effect on the rest of its business.

Eir is effectively arguing that the Government’s proposed approach to delivering rural broadband could have presented a fundamental threat to the company’s capacity to continue operating and delivering broadband in the rest of the country.

The company’s argument is that rules the Government is seeking to impose on the winning National Broadband Plan bidder would eventually become the common standard across the country. These rules include higher levels of customer service and lower prices offered to broadband providers operating within the so-called “intervention area” of 512,000 rural premises covered by the NBP.

“By designing a process that would have forced Eir to offer better wholesale prices and access, better service levels and lower prices for approximately 20 per cent of our network, it ensured that eir would ultimately be forced to offer those same elements across the other 80 per cent of our business should eir have stayed in the NBP.”

This, the company says “could have had a catastrophic effect on the rest of our business”, and would have raised “the very real and highly concerning issues of contagion, where regulatory equivalence would force eir to offer those onerous services and prices across the country as a whole”.

The company also argues in its letter that the envisaged levels of oversight in the NBP “are unnecessary for Eir”, as it is already regulated by ComReg.

Elsewhere in the letter, the company complains that both the Department and the Minister for Communications, Richard Bruton, have “erroneously” made the claim that removing 300,000 premises from the NBP, which Eir is serving commercially, led to an increase in the subsidy that is being paid to the Granahan McCourt led consortium which is delivering the Government’s plan.

The letter argues that the predicted subsidy level of €787 million which was in place in April 2017 - after the 300,000 premises were removed - was lower than the predicted €1 billion subsidy that was in place prior to the removal of the premises.

“I would be grateful if the Department would clarify the facts in relation to what has been a successful projects,” Eir chief executive Carolan Lennon writes in the letter.

However the Department of Communications has said Eir’s alternative plan “has not met” the State’s criteria for the roll-out of high-speed connections.

It is the clearest indication to date that the Government will formally reject the €1 billion proposal by Eir. The proposal was submitted by Eir in the letter to the department last Friday. A spokeswoman for the department said it did not satisfy key criteria relating to State aid, transparency, access to the network for commercial providers, State clawbacks for profit and risk sharing.

1 Swimming ban at Dublin's Merrion strand due to poor water quality
2 Coronavirus: What will reopen in Ireland’s phases to ease restrictions?
3 Coronavirus: No new Covid-19 deaths reported in State for first time since March
4 Next government could bring in work-from-home tax incentives – Taoiseach
5 Unconvincing account may take some heat out of Dominic Cummings controversy
Real news has value SUBSCRIBE