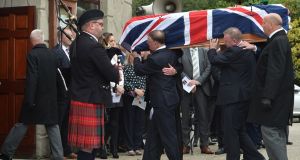 Mr Frazer, who died of cancer on Friday aged 58, was an outspoken campaigner on behalf of victims of republican violence during the Northern Ireland Troubles.

He was a man who was “fearless” and “tireless” in his fight on behalf of “those innocent victims he cared so much about”,

From the Markethill area of South Armagh, Mr Frazer’s father Bertie, a part-time member of the Ulster Defence Regiment (UDR), was killed by the IRA in 1975. Five other members of his family were subsequently killed by republicans.

In 1998 Mr Frazer founded Families Acting for Innocent Relatives (Fair) to support those who had also lost family members to republican violence.

At times a controversial figure, he founded the Love Ulster rallies which led to serious rioting in the centre of Dublin in 2006.

Pastor Billie Halliday said Mr Frazer “had his life’s fight”. “Willie did not like republicans,” he said, “and, contrary to things that have been said over recent days, Willie was no Catholic hater.

“Willie hated whenever Roman Catholics.... pointed guns at him or his people, that’s a different story. Them’s [sic] the people Willie Frazer had an argument with, as do I.

“Willie fought and he fought hard,” he said. “Willie caused the rest of us to stand up.”

About 500 mourners, many wearing Royal British Legion poppies on their lapels, attended the funeral at Fivemilehill Pentecostal Church . Other wore Orange collarettes – representing membership of the Orange Order – or UDR regalia.

Among those attending were other DUP politicians, as well as the leader of the Ulster Unionist Party Robin Swann and the Grand Secretary of the Orange Order Mervyn Gibson.

A number of people who lost loved ones in the Kingsmills massacre also attended, as did the Victims’ Commissioner Judith Thompson and Kenny Donaldson from Innocent Victims United.

A lone piper played as the coffin, draped in the Union flag and bearing a regimental beret representing his own membership of the UDR, was brought into the church.

As Mr Frazer’s former lawyer, Mrs Foster recalled how they had both been present at talks held in Leeds Castle in Kent in 2004; she had been part of the DUP’s negotiating team, and Mr Frazer had been protesting outside.

“I later received a phone call from an unknown number. It was Maidenhead police station, to say my client was in custody and was asking for his lawyer,” she said.

Mrs Foster described him as “someone who was witty who was original who was unvarnished yes but who was very much the real thing.”

He was laid to rest in the adjoining cemetery following the service.