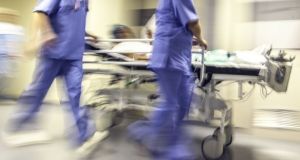 The INMO wants a universal face mask policy for all workers in healthcare settings.

Nearly one in every ten people in Ireland who has contracted Covid-19 is a nurse, new HSE figures show.

The figures, released to the Irish Nurses and Midwives Organisation (INMO) reveal that that healthcare workers make up over a quarter of the Covid-19 positive cases tested in Ireland. A total of 9.2 per cent of diagnosed cases in Ireland are nurses, according to the HSE data.

The INMO has sought “an immediate investigation” into the procurement of personal protective equipment in the HSE after it said its embers were on occasion able to secure supplies from domestic sources when hospitals said these could not be obtained.

Ms Ní Sheaghdha also said the union wanted as a matter of priority, a review of occupational health advice that granted derogations to essential workers who were suspected Covid 19 positive, or were close contacts of people with the virus to work when asymptomatic within the 14-day quarantine period.

“There is no evidence that despite being asymptomatic that they are not a vector for this virus, and there is WHO evidence of pre-symptomatic transmission”, she said.

Ms Ní Sheaghdha said the INMO expected that no stone would be left unturned in seeking all available supplies of personal protective equipment domestically, as well as internationally, to protect its members when they are at work.

“If our members can source supplies at short notice domestically there are serious questions to be asked. This is a matter of extreme urgency as shortages are being reported to us at an increasing rate. There cannot be an expectation that staff will work without adequate personal protective equipment.”

The union said that Ireland faced one of the highest rates of diagnosed healthcare worker infection in Europe. It said the European Centre for Disease Prevention and Control found on 8th of April that across Europe, “between 9 per cent and 26 per cent of all diagnosed Covid-19 cases are in healthcare workers.”

The INMO said it wanted to see action and clarity on the figures, including:

* A universal face mask policy for all workers in healthcare settings;

* More frequent and detailed publication of statistics on healthcare worker infection, including the source of transmission;

* Updated guidance on personal protective equipment and for occupational health, ensuring that healthcare staff are given appropriate and safe time for self-isolation.

Ms Ní Sheaghdha, said:“The overall public health measures are having a welcome and substantial impact on the spread of Covid-19. Worryingly, rates of healthcare worker infection are on the rise.

“We need to urgently see a detailed breakdown of where the infection is occurring, in order to take rapid corrective action. That should include a review of policy to ensure everyone working in a healthcare facility has the appropriate level of personal protective equipment . It is consistently our members’ top concern.

“We also need to see these figures for healthcare workers published officially and regularly. Clarity and transparency on this issue will prevent unhelpful, runaway speculation which has caused great fears amongst our members and their colleagues in other professions.”