The HSE has outlined its plans for nursing homes worst hit by COVID-19 at its latest media briefing. Video: RTE News Now 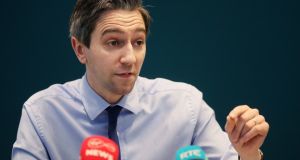 Minister for Health Simon Harris during a press conference at the Department of Health in Dublin. Photograph: Brian Lawless/PA Wire.

Minister for Health Simon Harris has said there may be a need for “more stringest” checks at Irish airports as crisis teams are being sent into nursing homes to deal with coronavirus outbreaks.

Mr Harris said there may be a need for more stringent checks at airports “to make sure that while we’re all doing what we’re meant to be doing here, we don’t have other people coming in who aren’t taking it as seriously in their country as we are here,” he told the Pat Kenny show on Newstalk.

His comments come after concerns were raised about a Ryanair flight carrying almost 200 fruit pickers into the country this week with allegedly no social distancing measures on board.

A letter addressed to a Meath councillor, purporting to be from a Ryanair employee, said the chartered flight from Sofia on Monday had 189 passengers.

“There was no social distancing on board, putting all the cabin crew at risk, there was also 200 bags in the hold of the aircraft putting the ground handling agents at risk,” the letter claimed.

Seperately, Mr Harris said 18 Covid-19 response teams, including doctors and nurses, are to be deployed to nursing homes around the country, with 61 HSE staff already deployed.

Mr Harris told RTÉ’s Morning Ireland every union has worked with the HSE to agree their members will be redeployed – and this will include doctors and crisis management teams.

“We are making good progress as a country but we need to redouble our efforts with regards to nursing homes and residential care centres.”

The National Public Health Emergency Team will on Friday review measures taken to tackle the large number of outbreaks that have occurred in nursing homes and other institutional settings so far.

There have been 254 outbreaks in residential settings, of which 163 were in nursing homes.

Some 302 of the deaths so far have occurred in residential settings – including 253 in nursing homes.

The Minister said a number of measures will be taken on Friday, including an increase in extra testing, which will include testing asymptomatic people.

“The day you believe you have done enough is the day you lose the battle against this deadly virus.

“We cannot save everyone, but we will make sure nobody is left behind.”

The frontline in the battle against “this disgusting virus” is in residential care centres, he said.

HSE head of communications Paul O’Connor said a coronavirus contact tracing app is still being tested and could become available next month.

Mr O’Connor said: “The app is currently being tested and it is my understanding that towards the end of the month, it is going to finish testing.”

When asked if the app will become available when the restrictions are due to be lifted on May 5th, he said: “That’s the principal focus of it so not in this situation - so it is pretty much when restrictions ease and people move around a bit more.”

“It is still being tested and we are working through some of the privacy and data issues.”

Nursing homes and community care are “behind the curve” in dealing with the coronavirus outbreak, the head of Nursing Homes Ireland has said.

There is not consistency of support to nursing homes throughout the country, and “that needs to change,” Tadhg Daly told Newstalk Breakfast.

The two issues that have been highlighted consistently for the sector have been testing and the lack of personal protective equipment, he added.

“We saw what was happening in other countries. We made contact with our members on January 30th, and we were in constant contact with the HSE and the Department of Health throughout February.”

Ireland was not “an outlier” here, he said. The numbers of deaths in nursing homes were not higher than other countries.

Some of the measures taken have been having an impact, Mr Daly said, adding figures for transmission have slowed down in recent days.

Speaking in the Dáil on Thursday, Taoiseach Leo Varadkar said nursing homes would not be the forgotten frontline in the war against coronavirus. But he said the fact the problem was not being dealt with as quickly as he would like was a reflection of the scale of the Covid-19 crisis.

Minister for Health Simon Harris announced a €72 million support package for nursing homes at the start of April that included twice-daily staff screening and priority testing in an effort to stem coronavirus outbreaks.

There have been 486 Covid-19 related deaths in the Republic and a total of 13,271 confirmed cases.

While the daily number of deaths reached a new high of 43 on Thursday, overall the rate of growth in cases, intensive care unit (ICU) admissions and deaths has slowed considerably since the start of the month.

The number of newly confirmed cases of Covid-19 is peaking “around now” and should decline in coming weeks, said Prof Philip Nolan of NUI Maynooth, who leads a team modelling trends in the epidemic.

When asked about the lifting of restrictions on Friday, Mr Harris said he will be guided by the health experts.

“We are not going to erase the progress people have made or put lives in danger.”

The Minister said he would like to put a plan in place to lift the restrictions gradually, but he warned that will not mean going back to life as it was before and measures such as social distancing will remain in place for some time. “The lifting of restrictions is going to be complex and delicate and will involve trial and error.”

There will not be a dramatic change, he said. “It’s going to be gradual, slow and we have to monitor it carefully. I’m determined we’re not going to go the way of Italy or Spain.”

Immunology expert Prof Kingston Mills has cautioned that testing for Covid-19 needs to be “ramped up” before any restrictions can be lifted.

“The lock in is working, it is restricting the spread of the virus,” he told Newstalk Breakfast. However, he warned that testing needs to be at the highest level.

“Hopefully by May 4th transmission rates, the number of deaths and ICU admissions will have gone down – that’s the aspiration, they’re the real values.

“Test every individual in contact with anyone tested positive; otherwise you’re allowing people to escape the net, who may not have symptoms and can spread the virus.

“The laboratories have been overrun, hospitals are now doing testing – I think there’s a commercial company going to come on board to dramatically increase the testing,” Prof Mills said.

Easing back into “normality” will be a slow process, but it cannot be considered unless there has been widespread testing, he said.