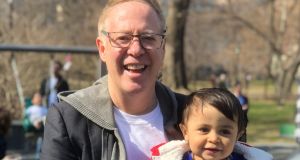 Mark O’Toole with his daughter in Central Park in New York before the coronavirus restrictions. 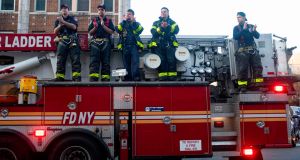 Firefighters applaud in front of the Mount Sinai Hospital in Queens this week to show gratitude to medical staff and essential workers on the front lines of the coronavirus pandemic in New York City. Photograph: Johannes Eisele/AFP/Getty 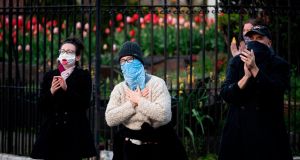 People show gratitude to medical staff and essential workers on the front lines of the coronavirus pandemic in New York City this week. Photograph: Johannes Eisele/AFP/Getty 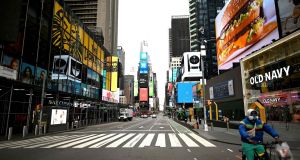 It’s been nearly four weeks since New York governor Andrew Cuomo issued a stay at home executive order. Those four weeks feel like it’s been four years, and a lifetime ago since I felt the freedom to simply walk around, go into a restaurant or movies,  or have play dates for my kids. Normal life seems like a distant memory.

New York City’s official Covid-19 death toll has soared past 10,000 people this week. One of the greatest cities in the world, a city I’ve called home since leaving Wicklow more than 20 years ago, is the epicentre of the Covid-19 outbreak in America and globally. It feels very different here in many ways now since the coronavirus crisis. For one, the sound of silence. I’ve not experienced it before in my two decades of living here. The usual bustle and noise of big crowds and cars is gone  and for the first time I noticed the sound of my feet hitting the pavement while out running, my breathing and the birds singing. I've stopped numerous times to listen. I even stood in the middle of Fifth Avenue and didn’t get mowed down by speeding cabs. That felt bold. Forbidden. Naughty almost.

Times Square, a kaleidoscope of flashing colour and advertising that can attract more than 300,00 visitors a day, has been struck bare by the absence of tourists and citizens. It’s a jarring juxtaposition. Standing there, it’s hard to absorb how different it is from before. The majestic Grand Central station, hub to the suburbs and states, is barren and beautiful in its emptiness. A smattering of vulnerable and homeless people, with nowhere else to go, loitered in corners.

I never imagined my family and I would ever live through a global crisis such as this. Recently the coronavirus pandemic became personal. Given the extraordinarily high infection rate in New York, it was inevitable but still very difficult when a family member tested positive for coronavirus. Until a week ago I could view the pandemic from what felt like a distance, as an inconvenience to everyday life. I knew it was there, but it was “over there” and not affecting me. Then the dreaded news came. My cousin’s husband Patrick (Pat) Maguire died last Wednesday, a little over a week on a ventilator. A day later his mother, who was originally from Cork, sadly died after also having Covid-19.

Pat’s symptoms started with a wheeze and went rapidly downhill from there. He was also treated with hydroxychloroquine (the malaria drug), but it didn’t help. When I heard he was in the hospital, I thought about him every day. I desperately hoped he would recover. Pat was a funny guy. A stand-up guy. He was good to me. His wife and two children are devastated.

Irish abroad: Will you stay or go?

I know five people who are currently fighting this virus, including my son’s teacher, and two who have recovered.

I find myself lately looking at life through a dystopian-like prism – distorted, raw, grim. I recoil in horror when I see people shaking hands, kissing, touching, coughing on TV and films.

I can already see the effects of a total commercial shutdown. Jobless claims increased 1,000 per cent in a two-week period. In New York alone, nearly a million jobs disappeared overnight – bars, restaurants, cinemas, hairdressers and childcare shut down. Any non-essential business owners and staff were told to work from home, if possible.

In the dark I try to find the light. As the old cliche goes, hope springs eternal, and New York city’s wonderful oddities are sprouting up. Spring tulips are blooming around the city as a stark contrast to our current grim reality. The street performer known as the Naked Cowboy is still strumming his guitar on the streets. He doesn’t bother with a hat for tips since there’s not many people around to give him any, but he continues playing.

I’ve decided to alter my running routes around the city to better practice social distancing. Running on rainy days is better as there’s less people out. I’ve not experienced urban runs as exhilarating and strange as the ones I do now. I can run on the roads and on the paths of Manhattan, unfettered by throngs of thousands blocking my way.

It sometimes feels like I’m running in a museum. The city is embalmed in a state of suspended animation. A city on pause. But the quietness has allowed me to soak in and observe things that I've never appreciated before. There is a surreal beauty to New York, even without the key ingredient of people, noise, bustle and action.

Despite my almost daily trips out to search for either food or cleaning supplies, and the rare 20 minutes exercise for the kids, I find an ethereal beauty to a mighty but almost empty city. I wanted to capture these images of what the city looks like now, because I firmly believe there will be an end to this. It may not be tomorrow but there will be a time when we have all come through the eye of the needle and make it to the other side. It will be our generation’s VE day, and I can’t wait to experience it.

Mark O’Toole is from Bray, Co Wicklow, where his family used to own the Harbour Bar. He has lived and worked in New York City for almost 25 years. He is writing a blog about his experiences during the Covid-19 crisis here