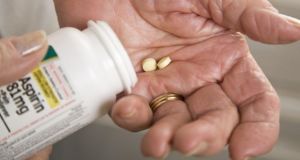 Regular doses of aspirin can reduce the risk of several digestive tract cancers including the almost invariably fatal pancreatic and liver cancers, a new study has found. Photograph: iStock

Regular doses of aspirin can reduce the risk of several digestive tract cancers including the almost invariably fatal pancreatic and liver cancers, a new study has found.

Although the link between the drug and cancer reduction is not new, the review of evidence from 113 observational studies found a fall off in risk of between 22 and 28 per cent.

The paper published in the journal Annals of Oncology includes an examination of 45 studies on bowel cancer alone and looks at 156,000 cases.

It also considers cancers of the head and neck, oesophagus, stomach, liver, gallbladder and pancreas.

Regular use of aspirin is defined as taking at least one or two tablets a week.

Carlo La Vecchia, professor of epidemiology at the University of Milan and the paper’s lead author, said there are about 175,000 bowel cancer deaths predicted for the EU this year, of which about 100,000 will be in people aged between 50 and 74.

“If we assume that regular use of aspirin increases from 25 to 50 per cent in this age group, this would mean that between 5,000 to 7,000 deaths from bowel cancer and between 12,000 and 18,000 new cases could be avoided if further studies show that aspirin does indeed cause the reduction in cancer risk,” he said.

However the estimate for high dose aspirin was based on just a few studies and should be interpreted cautiously, it said. The choice of dose should also take into consideration the potential risk of stomach bleeds.

The authors also noted that taking the drug for the prevention of bowel or any kind of cancer should only be done in consultation with a doctor.

Dr Robert O’Connor, head of research at the Irish Cancer Society, said that while the research is promising, it should be “looked at in a measured way”.

“This is a summary of observational research and there are reasons why those taking aspirin might see lower levels of cancer that have nothing to do with the medicine itself,” he said.

“Just because two things are associated does not mean that one causes the other.”

Using an ice cream analogy, he said while sales of it and sunglasses are associated and correlated, one does not boost the sale of the other.

“It is important that a person talks to their doctor about taking any medicine and one should not begin taking aspirin for long periods without professional medical advice as the agent can interact with other medicines and can have very serious side effects for some people,” he said.

Clinical trials are key in understanding true effects. The Irish Cancer Society has been funding the Cancer Trials Ireland research group looking at this association as part of international research across several countries. It hopes to draw results in the next few years.