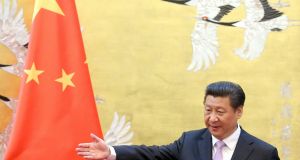 Chinese president Xi Jinping in the Great Hall of the People in Beijing.

China’s GDP showed the first contraction in decades as the coronavirus outbreak shut down large parts of its economy. The country also revised its death toll by 39 per cent, adding 1,290 fatalities in Wuhan, where the epidemic first emerged.

Equities rallied as the US took steps to reopen its economy. The Trump administration issued guidelines that could allow states and employers to abandon most social distancing practices within a month.

Germany’s cases increased at a faster rate for the second day in a row as the nation readies for some restrictions on public life to be lifted. Singapore reported its biggest jump in infections as an outbreak at dormitories intensified. New York’s shutdown was extended to May 15th.

Germany’s confirmed coronavirus cases increased at a faster rate for the second day in a row and the number of fatalities climbed above 4,000 as the nation readies for some restrictions on public life to be lifted from next week.

The country had 2,945 new infections over 24 hours, taking the total to 137,698, according to data from Johns Hopkins University. The pace of increase in new cases had declined steadily for six days until Thursday.

The number of German fatalities rose by 248, the smallest gain in three days, to 4,052, while 77,000 people have recovered from the disease.

Chancellor Angela Merkel on Wednesday announced tentative steps to begin returning the country to normal. Some smaller shops will be allowed to start serving customers again next week, and schools will gradually reopen in early May.

Roche Holding developed an antibody test for Covid-19 that it says it plans to start selling early next month, adding another of the diagnostic tools experts think will be needed to lift social-distancing measures put in place around the globe.

The test will probe blood samples for antibodies that show whether a person has been infected by the new coronavirus, the Basel, Switzerland-based company said in a statement. Monthly production could reach the high double-digit millions by June.

With the casino industry shut down by the coronavirus, Sheldon Adelson is suspending Las Vegas Sands’ dividend. He’s also looking to purchase existing resorts from others for the first time, according to people with knowledge of the matter.

Sands’ majority shareholder, Adelson said the savings will help shore up the company’s finances as it weathers the shutdown of casinos in the US and Singapore, and a sharp cutback in Macau. He personally collected $1.22 billion in dividends last year out of a total of $2.37 billion.

China revised its official count of deaths from the coronavirus, adding some 1,290 fatalities in Wuhan, the city where the virus first emerged last December. The addition, reported by state media, brings the nationwide death toll to 4,636.

The revision in numbers was due to several reasons, said the report. The first is that some patients died at home without seeing a doctor or being tested for the virus as hospitals were overwhelmed during the epidemic’s peak. Late and incomplete reporting due to medical workers and institutions being overwhelmed by the epidemic were also cited.

China’s economy recorded the first contraction in decades in the first quarter as the coronavirus outbreak shut down large parts of the world’s second-largest economy and dimmed the global outlook.

Gross domestic product shrank 6.8 per cent in the first quarter from a year ago, the worst performance since at least 1992 when official releases of quarterly GDP started, missing the consensus forecast of a 6 per cent drop.

Japanese prime minister Shinzo Abe’s sudden about-face on a cash handouts initiative indicates the government was no longer convinced the original plan was quick enough or big enough to support households as Japan ramps up its state of emergency.

Abe said Thursday that the government was now looking to give 100,000 yen ($926) to everyone rather than targeting the needy in the wake of the coronavirus, a move that could triple the cost of the program. He also widened his emergency declaration to cover the entire country.

The original plan was to give 300,000 yen handouts to households that could prove a loss of income, a condition that could have slowed down distribution of cash and increased the risk of infection at administrative offices handling requests.

China reported 26 additional confirmed coronavirus cases on April 16th, with 15 of them from abroad. The country has a total of 82,367 confirmed infections. No new deaths were reported.

The nation reported 66 asymptomatic cases for April 16. The country now has 1,038 such cases under medical observation.

South Korea is assembling a jobs package to combat rising unemployment as the coronavirus hits hiring.

The package, set to be announced next week, includes measures to help maintain employment, tackle joblessness and create new jobs while providing support for workers who are often overlooked, the finance ministry said, without providing more specifics.

The first jobs report to reflect the virus’ impact showed the unemployment rate jumping to 3.8 per cent in March from 3.3 per cent in February. The economy lost 195,000 jobs, compared with a year earlier.

The losses were the biggest since the 2009 financial crisis and have the potential to worsen in coming months, the finance ministry said.

French consumer giants LVMH and L’Oreal SA signalled a recovery could start soon, after the coronavirus caused sales to plunge in the first quarter. While much of Europe and the US remain in lockdown, shops have been reopening in China.

Sales in Louis Vuitton stores in mainland China are up about 50 per cent in the past three weeks over the same period a year ago, according to a person familiar with the matter.

L’Oreal chief executive Jean-Paul Agon said on a call that sales in China turned positive in March and are on track for a gain of 5 per cent to 10 per cent this month.

US president Donald Trump unveiled guidelines on reopening the US economy that could allow states and employers to abandon within four weeks most social distancing practices.

“We can begin the next front in our war,” Trump told reporters at the White House. “We’re opening up our country. We have to do that.”

The guidelines recommend states document a “downward trajectory” in cases for two weeks before beginning a three-phase process to return to near normal life.

Schools and day-care centres shouldn’t reopen before phase two, according to the guidelines, while restaurants, movie theatres and sports venues could open in phase one if they practice “strict physical distancing”.

Moderna said the US government has agreed to pay as much as $483 million for the company to develop and test its Covid-19 vaccine now in an initial clinical trial. The vaccine is one of the first to begin human trials.

Moderna said that if the trial is successful, it could reach final-stage testing by autumn 2020.

Almost all patients were discharged in under than a week, and only two patients died, STAT said, citing comments made this week during a video discussion about trial results with University of Chicago faculty members.

STAT cautions that trials are running at other institutions and full study results can’t yet be determined; Gilead told the news outlet that it’s looking forward to data becoming available.

US cases rose 4.7 per cent from the day before to 648,788 by Thursday afternoon, according to data compiled by Johns Hopkins University and Bloomberg News.

That was higher than Wednesday’s growth rate of 3.5 per cent but lower than average daily increase of 5.7 per cent over the past week. Deaths increased 14 per cent to 31,590.

New York cases rose 9.8 per cent, spiking higher after the hardest-hit state showed signs of stabilizing in the past week. New York’s cases had risen just 0.5 per cent during the same time period on Wednesday.

Seven US governors are forming a Midwest regional partnership to closely coordinate plans to reopen their economies based on data and advice from experts in a way that “prioritizes our workers’ health”, the leaders announced Thursday.

The move follows similar coalitions of governors on the West Coast and Northeast who are working together on how to reopen schools and businesses after the coronavirus outbreak eases.

The UK will extend the country’s lockdown by a further three weeks at least in an effort to stem the spread of coronavirus.

UK foreign secretary Dominic Raab, who is standing in for prime minister Boris Johnson while he recovers from his own infection with the virus, said the March 23rd decision to close most shops and meeting places and limit all but essential travel has worked to slow the spread of the virus.

“Relaxing any of the measures in place would damage both public health and the economy,” Raab said.

New York Governor Andrew Cuomo extended the state-wide lockdown to May 15th, citing progress made in limiting the spread of the coronavirus.

Cuomo also ordered masks to be worn by riders on public transit or in for-hire vehicles, such as Uber and Lyft. In addition, operators of public systems, private carriers and for-hire services must always wear masks.

New York had 606 deaths in the past 24 hours, the second straight daily decline and the lowest toll in several days. The state has reported 12,192 deaths.

Singapore had 728 new cases, the Ministry of Health said, the second straight day of reporting the most cases for 24 hours. About 90 per cent of the cases were work permit holders living in dormitories.

None of the new cases was imported from abroad. Singapore has not had any new imported cases since April 9th, according to the ministry.

US regulators are allowing hospitals to make their own versions of drugs that Covid-19 patients on ventilators need but that have become scarce.

Those drugs have fallen into shortage in the last few weeks as more patients need intensive care. The agency usually tries to boost supplies by increasing pharmaceutical manufacturing capacity, some of which it has done.

But “in light of unprecedented disruptions to, and demands on, the global pharmaceutical supply chain as a result of the Covid-19 pandemic, and in order to respond to evolving regional conditions, additional flexibility is temporarily needed to ensure that treatment options are available,” FDA said in the guidelines.

Switzerland’s businesses and schools will be allowed to reopen in three stages starting April 27th.

Hospitals will also be once again allowed offer a full range of medical services, the government said on Thursday.

Facebook added warnings to 40 million pieces of misinformation about the coronavirus on its main social network in March, part of an effort to stem the spread of bad advice and misleading articles.

Hundreds of thousands of posts deemed harmful were removed entirely, according to a blog post on Thursday by Guy Rosen, the company’s vice president for integrity.

In the next few weeks, users who liked, commented or reacted to misleading posts that were later taken down will be shown messages in their news feeds linking to factual information about Covid-19, the company said. – Bloomberg

1 Michael Smurfit: ‘I asked Trump to invite me to the White House for my 80th birthday’
2 Small businesses are cannon fodder in zealous anti-virus experiment
3 ‘I’m so lucky to be in the Caribbean – a million miles from Derry Girls’
4 Ryanair expects air fares to fall when flights take off again
5 Tax and the Pandemic Unemployment Payment: Your questions answered
6 Household savings soar as consumers stop spending
7 ‘Never mind GDP; the most fundamental job of any leader is to keep his people alive’
8 Irish business of Carluccio’s restaurants to be wound up
9 Ireland stands to benefit in a big way from investing in public transport
10 Revenue fears fraudsters tapped bank details of 3,000 taxpayers
Real news has value SUBSCRIBE