Dispute over fees threatens ‘flow’ of vital goods between Ireland, Britain and Europe 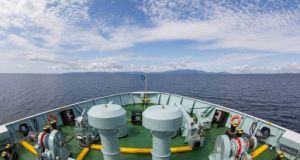 Volumes of freight have declined in recent weeks in line with coronavirus restrictions in Ireland, Britain and Europe. Photograph: Getty Images

A key supply line between the Republic and Britain has been disrupted by the impounding of the P&O vessel Norbay by port authorities in Liverpool on Thursday.

It is understood the dispute centres around the payment of €689,000 (£600,000) in fees to Peel Ports, owners of Mersey Docks and Harbour Company Limited, the formal name for Liverpool Port.

The Norbay is one of three P&O operated vessels on the Irish Sea between Dublin and Liverpool. The other two are the Norbank and the Clipper Pennant.

The Norbank was loaded and ready to sail from Dublin on Thursday for a passage to Liverpool, but was later stood down and its cargo taken off.

Volumes of freight have declined in recent weeks in line with coronavirus restrictions in Ireland, Britain and Europe, from where goods are sourced for Ireland via the British “landbridge”.

In a statement P&O said it had been “in discussions since this crisis began” with the owners of all of the ports it used “to ensure that we can manage payments while everyone deals with this unprecedented situation”.

The ferry company siad it had “asked for flexibility” in terms of time to pay, but “the Liverpool Port refused to respond even though we were committing to full payment”.

P&O said “the irresponsible and unnecessary actions of the Mersey Docks and Harbour Company Limited at a time of national crisis have closed an essential Dublin-Liverpool supply route, which means vital goods will not be able to flow between the UK, Ireland and Europe”.

P&O Ferries is owned by DP World, a global organisation which had earnings before interest, tax and depreciation of €3.04billion in 2019.

In its response Peel Ports said Liverpool played a vital supply role in many key logistics chains, including medical, healthcare and food. It said “customers who refuse to pay their bills put these and other supply chains at risk. Any decision to detain a vessel is always taken as a last resort, and only when there is a significant debt to repay.”

Commenting on the significance of the impounding and the standing down of other P&O ships trading with Liverpool, freight forwarding sources said the absence of P&O should not cause panic. Sources said there were other companies – Seatruck, Irish Ferries and Stena – still operating on the mid-Irish Sea route to Liverpool and Holyhead.

However, hauliers were fearful that the absence of P&O even for a short time would affect their capacity to travel through Liverpool.

Most of the Seatruck business on the route is for trailers, as opposed to drive-on and drive-off. Many drive-on and driver-off hauliers prefer to take the Liverpool route as they start early in the morning in Liverpool with “a fresh driver and a fresh tachograph” .

The Holyhead route, said one haulier, was a shorter crossing, but the Holyhead port was “much further from the bulk of English destinations”.