Victims’ families ‘disappointed but not surprised’; say they will take case to High Court 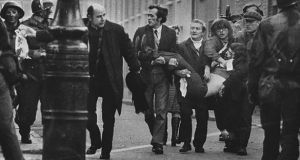 A file picture from Bloody Sunday in Derry on January 30th, 1972. Father Edward Daly and others are seen running down the street with an injured man after soldiers opened fire on protestors.

Prosecutors in the North have upheld their decision not to prosecute 15 soldiers over their actions on Bloody Sunday in Derry in 1972.

The Public Prosecution Service (PPS) announced on Tuesday the result of an internal review which had been requested by the families of ten of those killed and ten of the injured.

The senior assistant director of the PPS Marianne O’Kane who carried out the review, and who the PPS said had not been involved in the previous decision, said she had concluded that the “available evidence is insufficient to provide a reasonable prospect of conviction of any of the 15 soldiers who were the subjects of the reviews.

“Accordingly, the decisions not to prosecute these 15 individuals all stand,” she said.

The solicitor for the families, Ciarán Shiels, said the PPS’s decision was “deeply disappointing” but the families were “not surprised”. They were “left with no alternative now but to consider judicial review proceedings in the High Court,” he said.

However in March 2019 the PPS announced that only one former soldier, known as Soldier F, would face charges in connection with Bloody Sunday.

He is currently facing two charges of murder - of William McKinney and James Wray - and five charges of attempted murder.

Prosecutors concluded that the Test for Prosecution had not been met in regard to the other suspects, as well as a number of other potential offences - including murder - faced by Soldier F.

The range of potential offences which were considered against the 15 soldiers included murder, attempted murder and causing grievous bodily harm with intent.

The PPS said that Ms O’Kane “applied the Test for Prosecution afresh to the large volume of complex evidence and information considered by the original PPS decision-maker in order to reach new decisions”, and detailed legal submissions were also considered.

New decisions were taken in regard to each review request the PPS said, concluded that “the Test for Prosecution is not met on evidential grounds to prosecute any of the 15 soldiers in connection with the specific deaths or injuries sustained on January 30th 1972.

A “detailed explanation” of the outcome was submitted to everyone who had requested a review on Tuesday, the PPS said, and the 15 suspects were also informed.

Disappointed but not surprised’

John Kelly, whose 17-year-old brother Michael was killed on Bloody Sunday, said he was “disappointed but at the same time not surprised.” The PPS decided last year not to prosecute Soldier F for Michael Kelly’s murder.

Speaking with other family members at the Bloody Sunday memorial in Derry’s Bogside on Tuesday morning, Mr Kelly said, “We’re not giving up yet. We now have the next stage, and it’s been a long road - coming up to nearly 50 years, we’re all getting old, a lot of people are dying, but as long as we are able to walk we’ll go after them.

“We’ll not stop until we see justice for our loved ones and the next stage is the judicial review in the High Court, I look forward to that.

“I want to see Soldier F again. He murdered my brother and he should be prosecuted for what he did, end of story.”

Mr Shiels said that to apply for a judicial review of the PPS’s decision “one must first exhaust all alternative means of potential remedy, so it was therefore a necessary hurdle that the families have had to take.”

He said their submissions to the PPS “concentrated on 10 soldiers in relation to the incidences where we felt there was a realisable prosecution that could be available.

“This is by no means the end of the road . . . the campaign goes on,” he said. “Nobody’s getting any younger but they are very resilient clients, they’ve been here before, they’ve taken knocks before.

“We knew this was a stage in a process that we had to get past, we expected this, but I think in the High Court it’ll be another matter.”

Ms O’Kane said she knew the outcome “will cause further upset to those who have pursued a long and determined journey for justice over almost five decades.

“I can only offer reassurance to all of the families and victims of Bloody Sunday, and the wider community, that my decisions were conducted wholly independently and impartially, and in accordance with the Code for Prosecutors,” she said.

The Foyle MP and SDLP leader, Colum Eastwood, said the PPS’s decision on Tuesday “will cause more pain for those who have experienced the most unimaginable loss.”

He said the Bloody Sunday families had shown “the most unshakeable dignity and integrity in moments of justice as well as moments of disappointment. Today’s decision will not change that.

“I am pledged to do all I can to support these families who mean so much to Derry. We’ll continue to walk with them,” he said.

The Sinn Féin MLA Martina Anderson described it as a “deeply disappointing day” for the Bloody Sunday families.

The DUP MP for East Derry Gregory Campbell questioned the cost and value of a judicial review.

“Remember there’s already been almost £200 million spent on the public [SAVILLE]inquiry, the most expensive in legal history in the UK,” he told the BBC.

“Is there going to now be a judicial review, is that going to mean further trauma and delay for all of those involved, and what is the outcome going to be?

“Really, I think more and more people will be saying how much further is this going to go on.” – Additional reporting PA