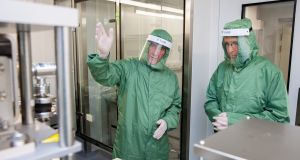 A new Electron Beam Lithography Lab, which is unique in Ireland, has been opened at the Tyndall National Institute, the research centre specialising in information and communications technology based in Cork.

The new facility enables rapidly transition from fundamental research, to prototype and manufacture with industry – and is considered a critical enabler for high-tech industry in Ireland.

“Tyndall is creating structures that are 100,000th the width of a human hair,” explained its chairman Eoin O’Driscoll.

“Manipulating matter at the atomic scale using electron beams is a gateway into deep tech quantum engineering technology. The quantum devices Tyndall is developing will power the next generation of communications; computing, chemistry, medtech, energy and climate mitigation technologies,” he added.

He added: “Tyndall is doing fundamental work to secure Ireland’s future as a technology leader competing on the world stage for deep-tech innovation and research. Tyndall is delivering ground-breaking work that will transform our high-tech economy, and is strongly supporting key Irish technology companies and SMEs. With facilities such as Tyndall, underpinned by Government investment, Ireland’s high-tech future is secure.”

The Taoiseach was also briefed on Tyndall’s expansion plan which will see and investment of €75 million in a campus expansion and new building to accommodate its anticipated doubling in size and impact by 2027. During his visit, Mr Martin spoke with some of award-winning PhD students and researchers about the impact of their work.

“Our ambition is to build on Tyndall’s 40 years of research excellence and industrial impact and significantly scale to address societal challenges through deep-tech innovation,” its chief executive Prof William Scanlon said.

“The next five years will see us significantly develop our international presence and influence, enhance our long-term industry partnerships, invest in our talent pipeline to equip future leaders with a wide range of transferable skills, and continue to explore and commercialise new research fields,” he noted.

Tyndall is a partnership of University College Cork and Government, including Science Foundation Ireland, and has a total income of more than €41 million per annum.

Its expansion is identified as a strategic investment priority in the National Development Plan, Project Ireland 2040. Its international standing is indicated by the scale of success it has had in securing funding through the European Commission’s Horizon 2020 programme for research.

It is one of Ireland’s five National Labs, and specialises in nanotechnology, electronics and photonics. It works with industry and academia to transform research into products and solutions in core market areas of electronics, communications, energy, health, agri-tech and the environment.

With a network of more than 200 industry partners and customers worldwide, it is home to a research community of 600 people of 52 nationalities, including industry researchers-in-residence.