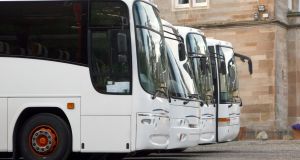 One of the reasons attributed by the sector to the collapse in price of coaches is the decline of UK operators. Photograph: iStock

Irish coach hire companies have watched the value of their assets plummet due to the failure of UK operators and a flood of second-hand, unwanted vehicles on the market.

As well as a virtual halt to commercial activity, Irish companies must now deal with a collapse in the market price of buses that will impact on their ability to upgrade fleets and secure financing.

There are more than 1,700 coach operators of various sizes in Ireland, the majority of whom are awaiting some slice of a Government stimulus package due to be detailed at the end of September.

The Government has committed €10 million to help nurse the tourist end of the coach business in particular.

Fáilte Ireland, the industry body that will administer the money through a business continuity scheme, is currently drawing up plans to allocate finances and is currently devising eligibility criteria.

While acknowledging the problems facing the sector, the fund falls far short of the nine month €32 million subsidy deemed necessary to tide operators over until next March when it is hoped some life might come back into the sector.

That analysis of the industry’s predicament, compiled by economist Jim Power last June, estimated that turnover had initially fallen by 95 per cent for most operators as a result of the pandemic, amounting to total losses of about €586 million.

“It appears certain that without significant assistance from Government, many operators will not survive,” it said.

Apart from the simple lack of passengers, the price of second-hand coaches that underpins company balance sheets has continued to decline, a further source of concern for commercial viability.

“The value of our fleets has been decimated by this crisis,” said JJ Kavanagh, of JJ Kavanagh & Sons, a larger operators based in Kilkenny. “I would estimate that the average vehicle value has depreciated by about 30 per cent.”

Higher-end tourist coaches cost between €250,000 and €325,000. Usually coaches have a “first life” of about 10 years before they become too old for tourist business and are replaced. Most vehicles in Ireland are sourced through UK suppliers.

Chairman of the Coach Tourism and Transport Council (CTTC) John Halpenny said some second-hand coaches in the UK worth £200,000 ( €220,000) are being sold through administration for as little as £80,000.

Company balance sheets put a value on such tangible assets which, alongside earnings, help determine the value of the business.

In normal circumstances, physical assets will be written down in value over a set period to reflect their ageing work life but sudden, rapid depreciation upsets this formula.

Similar disruption to valuations was experienced by property companies in the aftermath of the financial crash. Reduced balance sheets can lead to companies having trouble securing financing.

One of the reasons attributed by the sector to the collapse in price of coaches is the decline of UK operators, notably Shearings, Wallace Arnold and National Holidays which went into administration at the beginning of the summer.

“There is no actual demand for [coaches] because there is no work out there,” said Jarlath Sweeney editor of the trade magazine Fleet Transport, who believes more operators are likely to go out of business. “The value of the product is depreciating.”