No voluntary redundancy programme for the HSE at this time, health chief tells staff 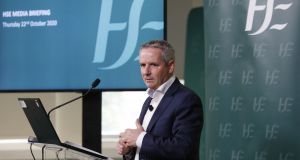 There is to be no voluntary redundancy scheme for staff in the HSE at this time, the head of the organisation, Paul Reid, as said.

In a bulletin to staff on Friday he signalled there would be changes to management structures in the health service as part of an on-going reform plan.

However Mr Reid said: “We will need more rather than less people in the medium term, therefore it isn’t intended to have a voluntary leaving scheme available at this time.”

The Government announced in the Budget that staffing levels in the health service are to increase by about 16,000 over the number in place at the end of 2019.

Mr Reid told staff that he had “commissioned a review of the HSE corporate centre earlier this year in order to put in place more effective structures at the centre to support our services across the country”.

“I wanted to ensure that our resources were invested wisely and, as far as possible, in frontline health services. We also wanted to be ready for the changes planned under Sláintecare (the overall Government health reform plan).”

“In the short time since then, our world has changed, and we are all working in ways we could never have predicted.”

“Our experience in dealing with Covid-19 has given us huge insight into better ways of working together and has convinced me more than ever that we need to streamline our management processes to allow more decisions to be made by the right people at hospital and community level,” he said.

Mr Reid said under new reforms to the HSE’s corporate centre two new senior management functions would be established. He said this would involve an eHealth and disruptive technology function “to drive our data and analytics capability and ensure system integration” and a population health and prevention function which would include test and trace capability.

Mr Reid said there would also be changes in some corporate activities at the HSE centre. He said, for example, within its operations area it would be moving “away from a management structure that has a tendency to reinforce the hospital/community divide”.

Mr Reid told staff that in many parts of the HSE they would not see any change in structure, or ways of working together, until next year. He said implementation will be towards the end of the first quarter in 2021.

“Since the onset of Covid-19, we’ve seen an increased requirement for us to strengthen and resource new functions, such as procurement, testing and tracing and public health. As a result, we have significant recruitment plans approved in Budget 2021 by Government.”

“We will need more rather than less people in the medium term, therefore it isn’t intended to have a voluntary leaving scheme available at this time.”