Pint lovers may be spinning at the notion: Conor Pope tries alcohol-free Guinness 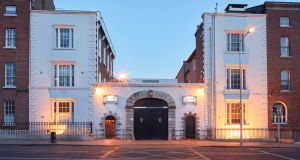 The new product was developed at Diageo’s St James’s Gate brewery in Dublin.

As if 2020 couldn’t get any worse, could it now be going down in history as the year they ruined Guinness?

A version of the national stout stripped of alcohol is about to go on sale and it’s not a big stretch to imagine Flann O’Brien, Patrick Kavanagh, Brendan Behan and generations of lesser known lovers of the pint spinning in their graves at the mere thought.

But before anyone storms the gate at St James’s in protest, they might want to try a can of the new Guinness 0.0. as Diageo claims that not only does it look, smell and surge like the real thing, it also tastes very much like it too.

The company says that at a corporate event in St James’s Gate earlier this year, when such events were still allowed, guests were mistakenly served from a secret keg of the non-alcoholic version rather than the real thing for the guts of an hour. There were dozens of pints downed and not one single person noticed the difference. And there are probably some people out there still marvelling at how clear-headed they felt after their night on the lash in Dublin 8.

Aisling Ryan is the innovation brewer at St James’s Gate and has spent the last four years on the project working closely with Padraig Fox, the general manager at the Guinness Open Gate Brewery, where all such products are born.

The pair joined The Irish Times for a Zoom tasting session ahead of the roll out and even before the cans were opened at the soberest drinking session of all time both seemed confident in their product, despite the evident scepticism of this writer and long-time fan of the black stuff.

“So, you’re the woman who ruined Guinness,” we started, making sure to lay our cards quickly on the table so everyone was clear where we stood.

An unflappable Ryan was insistent that far from ruining Guinness, she and her team had developed a stout that has the look, taste and feel as the real deal.

She said that when they were starting out they realised they had two options. They could brew the the beer without alcohol or to take an already brewed product and remove the alcohol after the fact.

They went for option two. She said the most common way for alcohol to be taken out of a beer is with heat but accepted that simply trying to boil off the alcohol would have resulted in a disgusting beer that would have brought shame upon the name.

“We wanted to find a gentle way of removing the alcohol that did not put the beer under thermal stress,” she said.

They went for cold filtration. Ryan admitted that she felt the burden of a history spanning more than 200 years on her shoulders as she set about the task.

“It is such an iconic product and so distinct.

“We wanted to make sure it had the same look and feel and the same aromas and the same surge and settling. Everyone wanted it to be the best version possible.”

“We are not taking Guinness away,” Fox stressed. “A lot of people who don’t want to drink in a pub are not well catered for and maybe don’t want to spend the night drinking soft drinks.”

When asked what the literary alcoholics of times past might make of the development he laughed and said simply.

“I would love to give them a pint in a blind taste test to see what they’d make of it.”

With none of them available to taste the product, The Irish Times stepped into the breach.

The blue-tinged can opened in exactly the same fashion as a regular can might and the widget worked its magic in an identical fashion as well. The pour was the same as it ever was and the creamy head settled just the same too.

Holding a pint of it, it looked for all the world like a proper pint.

And then the first sip. My goodness my Guinness tasted like it always does out of a can.

Was it the best pint ever poured or sipped? No, no it was not. But it was very, very close to a regular can of Guinness with the only real different being it might actually be good for us or at least not quite so bad for our liver.

It will be available in the Home Counties of Britain from next week and before you can say cultural misappropriation tá siad ag teacht to its home place and a supermarket or off licence near you early in November.