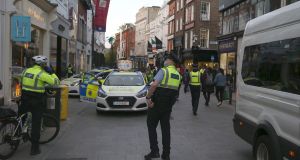 “We were using public order legislation to prevent, actually, what would have been a frightening stampede up Grafton Street,” says Garda Commissioner Drew Harris. Photograph: Stephen Collins

Irish extremist protest groups were showing a “propensity for violence” and gardaí were constantly gathering intelligence on their activities and future plans while investigations into their main figures were advancing, Garda Commissioner Drew Harris has said.

However, he added traditional forms of protest were “a legitimate activity” which was not illegal or banned under the enforcement measures introduced for Covid-19.

“We were using public order legislation to prevent, actually, what would have been a frightening stampede up Grafton Street,” he said. “And that’s a tight enough pedestrian street so that can’t be allowed to happen. There was no heavy-handedness on our part. Our response was proportionate to what we believe were the public order threats created by that protest.”

On Wednesday, gardaí mounted a major policing operation on Grafton Street by flooding it with personnel and vehicles. They also placed a cordon on both ends of the street to ensure a protest group in the city at the time could not run through the street or stage a sit-down protest as a protest group did earlier this month.

Some of the protesters made their way into Lemon Street, off Grafton Street, and at one point protesters burst through the cordon, clashing with gardaí. Batons were drawn and used by some of the gardaí and 11 people were arrested, nine later charged.

Mr Harris said extremist far-right groups in Ireland had announced themselves to people in public – including social media – before then retreating and using closed messaging systems to communicate with each other. When extremist groups held protests there was never any clear leader or organiser that gardaí could liaise with to plan the parameters of a protest event, he said. Those events were now happening against the backdrop of a pandemic.

Regarding extremist groups, he said: “We see intelligence that tells us what their intentions are . . . They appear to be to disrupt [Dublin] port, to disrupt the activity of the Government and to disrupt Government departments. And that can’t be tolerated.”

He described far-right groups as having “a mix of extremist views”. Some people believed in the great replacement theory – a conspiracy suggesting predominantly white populations were being deliberately replaced with people from other ethnic groups by mass migration – which had become very popular with far-right groups online.