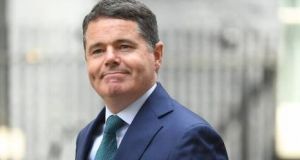 Minister for Finance Paschal Donohoe: “This is a Government that is more stable than is sometimes acknowledged.” Photograph: Getty Images

Minister for Finance Paschal Donohoe has said that reducing the budget deficit will become more important next year and require “difficult choices” as the country seeks to repair its finances.

Mr Donohoe defended the Government’s huge borrowing and spending to support the economy and society during the coronavirus pandemic, but was clear that the large-scale borrowing seen this year and planned for next year could not continue indefinitely.

He was speaking during a public interview at the delayed MacGill “summer” school, which is taking place online this year.

“The larger your deficit, the more exposed you are to forces beyond your control, and in particular to the consequences of decisions that financial markets can take.

“So if you are concerned about the effects that markets can have on political choices and on the health of states then reducing your reliance on them to pay for day-to-day political decisions is so important,” he said.

He said that reducing the deficit, balancing the budget and running a surplus was the best defence and the safest course of action for countries with open economies, especially small countries such as Ireland.

Mr Donohoe said the Government was able to borrow very large sums of money because of two factors. One is the stance of central banks – which he said was out of his control – and the other is domestic economic management, which was very much within his control.

He said that the historically low rate at which Ireland was able to borrow was influenced by domestic economic management, which had stabilised the public finances and delivered a budget surplus. If the external environment deteriorated, he said, it would make domestic choices even more important.

Mr Donohoe said he was intensely aware of the social and economic costs of the lockdown and the “loneliness people are feeling and how anxious many people are...Those costs are ones I am really aware of in the decisions we make.”

A combination of personal behaviour and medical technology would “beat the disease”.

However, he warned that if the levels of the disease return after the lockdown to where they are at present “then further difficult or even more difficult choices await”.

Mr Donohoe also offered a strong defence of the political centre in Ireland.

On the current coalition Government, he acknowledged “a very difficult start over a number of months”.

However, he said: “This is a Government that is more stable than is sometimes acknowledged.”

He said it “does have competition in it and does have dynamics within it as each party tries to protect itself but also at the core of it has some good relationships between political leaders and does have a unity of purpose in trying to serve our country well at a time of such risk.”

The school, which is normally held in July in Glenties, Co Donegal, has been taking place since Thursday at macgillsummerschool.com, and continues on Saturday when Olivia O’Leary interviews Taoiseach Micheál Martin.