Drugs and gun seized amid arrest of John Gilligan in Spain 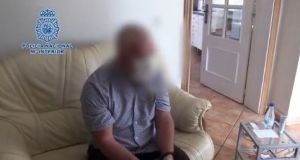 Convicted drug dealer and former drug gang leader John Gilligan faces the prospect of spending most of the rest of his life in prison after being arrested in a police operation in Spain during which a gun and drugs were seized.

Checks were being made to determine if the gun seized may be the same firearm used by the Gilligan gang to murder crime journalist Veronica Guerin in 1996.

The Spanish police added that their detectives and the Garda had also received intelligence that guns were being prepared for delivery by the gang in Spain to their associates in Ireland.
The Irish Times has learned the three guns, loaded with 9mm ammunition and “ready for use”, reached their destination in Ireland and were seized here earlier this year. Garda are continuing to investigate a Dubliner, who is based in Ireland and known to Gilligan, in connection with the seizure.

If the drugs and gun are proven to be linked to Gilligan, now aged 68, he will be imprisoned for a very lengthy period in Spain. The Dublin man was in custody in southern Spain on Friday and was likely to remain locked up as the police investigation continues.

The firearm seized was a Colt Python revolver, the same type of gun that was used by the Gilligan gang to kill Ms Guerin. Garda sources said that when ballistics testing was conducted on the firearm by the Spanish police it would be crosschecked against the technical firearms evidence gathered during the Guerin murder inquiry in the 1990s.

The Spanish National Police has specifically referenced the possible link between the gun and the journalist’s murder.

“A revolver has also been found buried in a garden, of the same make and model as the one used in the murder of a journalist that took place in Dublin in 1996 and whose possible relationship is being investigated,” it said.

“The Spanish agents are conducting negotiations with the Irish police to determine if it is the same weapon.”

Garda sources in Dublin said that while it was “not impossible” the gun used in the killing had laid buried in Spain where it was found on Wednesday, it would be “highly unusual” for a crime gang to retain such a murder weapon for such a long time.

Garda Headquarters in the Phoenix Park, Dublin, said it did not comment on individual cases, but confirmed it was working with the Spanish police about the arrest of an Irish man in southern Spain.

Gilligan and five other people were all arrested on Wednesday in Alicante as part of a pre-planned operation by the Spanish National Police, supported by the Garda and the UK’s National Crime Agency. The search operation saw armed police storm a house Gilligan was staying in, and was part of a wider investigation into criminals using the postal service to send “marijuana and hypnotic drugs to the United Kingdom and Ireland”.

Spanish police confirmed the arrest of the six suspects as well as the seizure of 4kg of marijuana and 15,000 pills in the search. A further 4kg of marijuana buds and 11,000 pills were also found packed into parcels at four other properties.

“Those arrested, led by a well-known Irish criminal, were part of a violent group of drug and arms traffickers and specialised in sending illegal merchandise from Spain to the United Kingdom and Ireland through parcels,” Spanish police said, also releasing a video of Gilligan’s arrest.

“The operation began last year when it was discovered that in the province of Alicante, specifically in Torrevieja and Orihuela Costa, an organisation led by a well-known Irish criminal had settled,” Spanish police added, referring to John Gilligan but not naming him.

“This person had been investigated in the past for various crimes and had even served 17 years in prison for importing large quantities of hashish. Alerted by this situation, the agents contacted other police forces and thanks to international police co-operation, the rest of the gang members were identified.”

Spanish police said the group tried to evade detection by hiding their drugs in postage parcels, with boxes of children’s dolls also discovered at the address where Gilligan was arrested.

“In addition, and thanks to the intelligence work carried out in Spain in collaboration with Irish agents, it was learned that an arms delivery was going to be carried out in Ireland by members of the organisation settled there,” Spanish police said.

“The operation finally allowed the seizure of three 9mm parabellum caliber pistols, loaded and ready for use.”

The Spanish police added that the six arrests on Wednesday and the investigation that has been ongoing for some time into the suspects had “culminated in the total dismantling of the criminal organisation”.

As well as the arrests and drugs and gun seized on Wednesday, Spanish police also seized two vehicles, 10 mobile phones, postal and financial documents and kit for mixing and vacuum packing drugs.

Gilligan was released from Portlaoise Prison, Co Laois, almost exactly seven years ago after serving 17 years in jail, most of that for drug trafficking and some for threatening to kill a prison officer.

Gilligan had graduated from organised robberies to the drug trade and in the early and mid-1990s was one of the biggest drug traffickers in the Republic. However, when his gang murdered Ms Guerin in 1996 the gang imploded, with some members going on the run abroad and others being arrested in Ireland.

While Gilligan was never convicted of the murder, he was put on trial for drug smuggling and one of the longest drug-related prison sentences in the history of the State was imposed on him.

On his release from prison he made efforts to stall the Criminal Assets Bureau’s plans to sell his Jessbrook equestrian centre and former home near Enfield, though he was unsuccessful.

He also tried to regain a foothold in the Irish drug market, though that also failed, and some of the major criminals in the underworld made repeated efforts to shoot him.

In one such attack, at the end of February 2014, Gilligan was shot and wounded at his brother’s house in Clondalkin. Photos emerged of him in a wheelchair after the attack, and he fled to the UK for a period. Exactly two weeks after the attack that almost killed Gilligan, Stephen “Dougie” Moran, who had been driving him around in Dublin, was shot to death at his home in Lucan.

Two years ago Gilligan was arrested as he attempted to board a plane at Belfast International Airport bound for Alicante, Spain, after €20,000 in cash was found in bundles in his luggage. However, the case against him was dropped 12 months ago.

Gardaí believe Gilligan has been trying to become established in the drug trade in Spain, though has now been taken out of circulation once again after his arrest on Wednesday in Alicante.